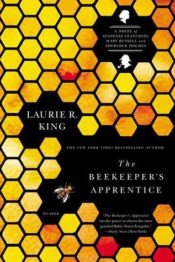 This is the first installment in Laurie R. King’s series retelling of the Sherlock Holmes mysteries. The series is set after Holmes’ supposed retirement from detective work, and begins when Mary Russell, a teenage orphan who lives on the farm next to Holmes’ retirement pad, literally runs into Holmes on the moor.  Over time, Mary becomes Holmes’ defacto apprentice, and this first novel is really concerned with laying the groundwork for the series (Wikipedia tells me there are 17 books after this first installment, which […]

SPOILER WARNING! As I’m reviewing all three books in a trilogy, it’s going to be difficult for me to discuss the books without minor spoilers, especially in books 2 and 3, as they naturally follow on from and develop stuff that’s gone before in the series. So if you want to approach this series entirely spoiler free – you may just want to read the synopsis for book 1. #CBR10Bingo: Heroine Complex: So it begins Heroine Complex – 4.5 stars Evie Tanaka is the long-suffering and ever patient personal assistant […]