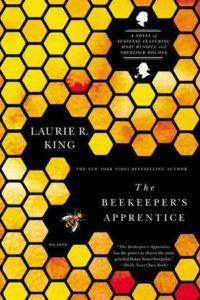 This is the first installment in Laurie R. King’s series retelling of the Sherlock Holmes mysteries. The series is set after Holmes’ supposed retirement from detective work, and begins when Mary Russell, a teenage orphan who lives on the farm next to Holmes’ retirement pad, literally runs into Holmes on the moor.  Over time, Mary becomes Holmes’ defacto apprentice, and this first novel is really concerned with laying the groundwork for the series (Wikipedia tells me there are 17 books after this first installment, which came out in 1994!)

On to the pros and cons.  The pros: I really liked the introduction of Mary Russell to the Holmes world- aside from Mrs. Hudson (Holmes’ housekeeper) and the occasional villainess, the original Holmes stories had very few female characters.  I also liked the way that King has melded the Holmesian world with the events of the early 20th century- the first world war and issues in ‘the Palestine’ form the backdrop against which the events are set.

Then there are the cons: the pacing and tone were uneven, largely because King switches from episodic-feeling first half, where Holmes and Russell solve multiple small mysteries, to a single overarching mystery in the last half.  Because the first half presented the chapters as almost stand-alone adventures, the switch was a bit jarring.  I also wasn’t the biggest fan of the villain or ultimate resolution- there was so much build up but then an unclimactic climax, hindered by a lack of clues about who the Big Bad was going to be.

Finally, I wanted to comment on the cons that GoodReads reviewers seemed most bothered by- the “Mary Sue-ness” of Mary Russell and the pseudo Romantic relationship between Holmes and Mary.  Neither of these things bothered me, for different reasons: on the ‘Mary Sue-ness’: firstly, I love me a rocking heroine- we get men like James Bond or Jack Reacher or Captain America all the time, and no one complains that they’re ‘too smart’ or ‘too brave’ or ‘too perfect’.  Secondly, I disagree that Mary is perfect- she is introverted and argumentative and possibly on the autistic scale, just like her mentor Holmes (again: no one complains that Holmes is too perfect…).  On the Romantic relationship: this point raised some hackles because of how young Mary is (15) when the novels begin.  My issue with this criticism is that I just wasn’t picking this up- rather, I thought that King was setting up a mentor/mentee relationship, with overtones of father-daughter (Mary is an orphan and Holmes is a loner, so it seemed plausible).  Maybe I read it differently than others, but I just wasn’t getting the creep factor here.

As an overall verdict: I might pick up the next novel to see how King develops the Russell-Holmes pairing going forward, but I’m not rushing out to buy it right now. (If there was an audience for 17 more novels, I’m hoping King resolves the unevenness going forward).

#Cbr11bingo- And So It Begins