Check out the first ever CBR Book Sale! Look through the list of books, and see if there's something for you.

> FAQ Home
> Genre: Biography/Memoir > It is said that no one truly knows a nation until one has been inside its jails. 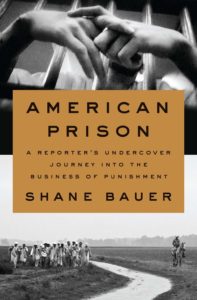 Like many of the books I read this year, I found American Prison: A Reporter’s Undercover Journey Into the Business of Punishment by Shane Bauer on NPR’s Best Books of 2018 list. I love NPR’s list. There are so many books and genres to choose from, and most of them have been very interesting and readable. I’m eagerly awaiting their 2019 list, but I haven’t seen it yet. I really hope they haven’t discontinued it. In addition, American Prison was one of Barack Obama’s favorite books of 2018.

Shane Bauer is a reporter for Mother Jones. In 2014, Bauer went “undercover” as an entry-level prison guard at a private prison in Winnfield, Louisiana. He was paid $9 an hour. Undercover is in quotes because Bauer used his real name and did not lie on his resume. Very little if any kind of background check was done, and Bauer was hired immediately.

American Prison alternates between Bauer’s four months spent as a prison guard, and the history of for-profit prisons in the United States–primarily the South. Jumping back and forth between the present and past, as well as the prison history in so many different states could sometimes be confusing. However, I found Bauer personable and relatable. He seemed very honest about his experiences, and it was a glimpse into a world that I know very little about.

Bauer goes into great detail about his experiences, from his training to his days spent with the prisoners. Most days, he has a pen with a microphone, so he is able to recount conversations word for word. He often hears guards speaking callously about the prisoners, which honestly did not surprise me. Jailing people is a way of dehumanizing them, and the guards could probably not continue to do their job without putting up some pretty strong emotional barriers.

However, a number of other aspects of American Prison did surprise me. I’d known generally about the imprisonment of black men after the Civil War as something of a continuation of slavery. However, I did not know the details. When Bauer writes about the history of for-profit prisons, he discusses the brutality that surrounded these prisons. Men and boys (some white, but mostly black) were picked up for a wide variety of crimes–some as meaningless as getting off the train in the wrong town. Then they were worked, often until death, brutally beaten if they did not perform to expectations. I don’t remember the statistics exactly, but the death rate at these places could be as high as fifty percent, significantly more than slavery. In addition to the big picture, Bauer tells a number of specific, heartbreaking stories of people who suffered cruelly.

Another surprise for me was how bad the working conditions were for the guards at the prison. The guards are put in very dangerous and difficult situations, and they’re paid $9 and hour! WalMart was paying similar wages, and I would work there in a second over a prison. In addition, the guards are very short staffed and very much outnumbered. I was surprised to learn that the guards were often afraid of enforcing the rules because they were afraid of physical retribution from the inmates. Bauer was often balancing the responsibilities of his position, and what he was in a position to enforce.

One of the sadder stories in Bauer’s prison was a man who committed suicide. He had obvious mental health issues and stated that he needed help and was going to kill himself. I know that sometimes you can’t help people no matter how hard you try, but in this case the prison did not have the resources to put him on suicide watch. They ignored his pleas, and he killed himself.

I learned a lot while reading this book. Bauer’s personal experiences were honest and thorough, and they added a new perspective to this topic. In addition, the history of private prisons brought some context and showed what can happen when profit is put above people.

You can find all of my reviews on my blog.