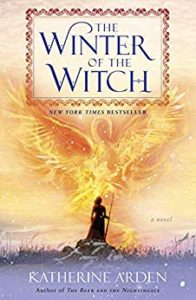 I loved the first novel in this trilogy because for me it was the perfect mix of fairy tale magic with some real life politics mixed in.  By focusing on the story of a young girl in her village, the novel had a nice intimate setting even as it dealt with a figurative battle between good and evil, the old ways and the new.  The greater politics opened up the potential for a broader scale in the rest of the trilogy, and I think that extended focus took away some of the magic of the early novel for me, even as Vasya spends even more time in magical realms and finds the home of her witch grandmother.

Vasya also goes through so many trials in this novel, and the repeated suffering is a bit hard to read.  Arden had set up so many pieces in the earlier novels, and she does wrap them up in this one, but that does mean this is a very broad ranging story. The Bear has returned, Russia is still threatened by outsiders, and the magical realm is still under threat as Christianity becomes less and less accepting of old traditions, which is why it is so easy for the Bear to spread chaos.

Vasya is not a perfect character, and she makes her share of mistakes, some of which affect her friends and families in bad ways. She also doesn’t always see the broader picture but it doesn’t help when the people and creatures that do only give her cryptic hints and hope she figures it out.  It’s been several months since I read this, so I’m hazy on the details. Arden does a good job of tying up all the plot lines but some parts seemed a bit oddly paced.  I personally just didn’t think the novel quite recaptured the magic of the first, but unfortunately a hero’s journey tends to involve the hero leaving their village and entering the broader stage so it would have been hard to recapture the intimacy.