Woohoo! I’ve got a blackout board and I’m almost completely caught up on reviews (10 left after this one). 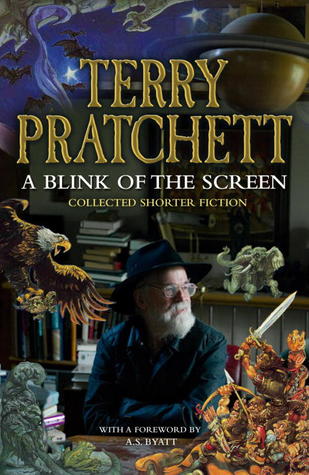 A Blink of the Screen: Collected Shorter Fiction by Terry Pratchett

I don’t normally read or really enjoy short stories, so this is definitely a good example of Bingo making us broaden our horizons! I found this short story collection by searching “collection” on Overdrive. I had thought I might reread some Stephen King or Neil Gaimen short stories, but when I saw this Terry Prachett selection, I was sold.

“Short stories always seem to cost me blood, and I envy the people who do them for fun.”

A Blink of the Screen is a collection of short stories and other “short fiction” written by Prachett over the years. Each chapter is introduced by the author, and it broke my heart a little when he would say “I might go back to this one and make it a full story!”. There are a few Discworld stories, including a rather long one about Granny Weatherwax. A couple of poems (one with the chilling line “Parents don’t teach us about death — they gets us pets instead”). He even includes some works he wrote for fan conventions, and an anthem for Ankh-Morpork that was once played on the radio.

The first story in the collection is called Crucible — Pratchett wrote it when he was TWELVE, which is rather demoralizing, considering it’s better than anything I’ve written in my entire life. It’s about a man who agrees to help the devil with his PR issues. Another short story, Kindly Breathe in Short, Thick Pants, is a radio broadcast about rationing fresh air. One of the funniest stories —  Final Reward — is about an author who kills off his famous barbarian character, only to have the man show up at his front door, ready to receive his final reward from his god. “Where does a 7-foot Barbarian hero go? Wherever he likes.”

It’s a great little collection, with very few stories I didn’t like at least a little. And I always love it when Death shows up: “YOU ARE NOTHING MORE THAN A LUCKY SPECIES OF APE THAT IS TRYING TO UNDERSTAND THE COMPLEXITIES OF CREATION VIA A LANGUAGE THAT EVOLVED IN ORDER TO TELL ONE ANOTHER WHERE THE RIPE FRUIT WAS.” 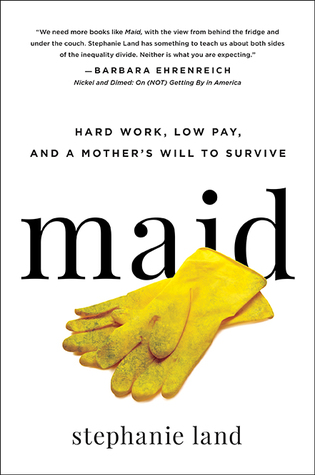 Maid: Hard Work, Low Pay, and a Mother’s Will to Survive by Stephanie Land

I’m using this book as my Readers Choice. The one square I didn’t fulfill was Two Heads Are Better Than One, because it’s hard enough to get my own reviews posted, much less coordinate with somebody else! I’m choosing to review Maid for this square because I really felt moved by this book and would highly recommend it.

“We work, we love, we do. And the stress of it all, the exhaustion, leaves us hollowed. Scraped out. Ghosts of our former selves.”

After divorcing her abusive husband, Stephanie Land and her toddler daughter wind up homeless, living in a shelter for a while before moving to transitional housing. Land opens the book with “My daughter took her first steps in a homeless shelter” — that’s pretty attention-getting. Maid tells us how Land dragged herself out of poverty, working her ass off cleaning houses for minimum wage in dangerous circumstances — where just an hour or two missed wages would make the difference between getting to eat that night or not. She and her daughter lived in unsafe housing, couldn’t get medical ailments treated, and her ex-husband repeatedly threatened to take custody of his daughter — a daughter for whom he barely provided any financial support. Despite all of this, Land ends up achieving her dream of becoming a writer, and moving to Missoula, Montana like she always hoped.

I have been broke many times in my life. I have definitely eaten my share of ramen noodles. But I have never experienced the kind of poverty Land suffers through here. Her father and mother are not able to or refused to give her any help. She doesn’t have a credit card to fall back on like I always do, or a friend who can lend her a few hundred dollars. Towards the beginning, she talks about how her mother and stepfather come to help her move from a homeless shelter to transitional housing. Her mother, who obviously has some sort of mental illness, offered to take Land out for lunch after — and then forced her to pay her last $10 to cover her meal. This was after she watched her daughter pack up her very few belongings and move them into a terrible, tiny little apartment. Giving up that $10 for lunch meant that Stephanie would have literally nothing in her checking account until she got paid again.

Anyone who doesn’t believe that the minimum wage needs to be raised or insists that people on welfare are leeches, ought to read this book. The hoops that Land has to jump through just to get a little bit of assistance with food or gas money or childcare, and then the horrible way she was treated as a result, would break anyone’s heart.