I have loved Representative Lewis since studying about the Student Nonviolent Coordinating Committee (SNCC) and their role in the sit-ins, freedom rides, and the 1963 March on Washington. While the March on Washington is most often remembered today as the location of Martin Luther King Jr’s I Have a Dream speech, earlier that day in his role as National Chairman of SNCC John Lewis spoke, giving an inflammatory speech that nearly had other speakers pulling out of the March.

When I heard last year that Representative Lewis had collaborated on a series of graphic novels recounting his time with SNCC through to Selma I put them on my to read list. The world angers me more often than not these days, so I thought now would be an important time to read more about social justice through nonviolence.

What I wasn’t expecting was to fall in love with both the artistry of Nate Powell and the young John Lewis. Representative Lewis started his life wanting to be a preacher, ministering to his flock of chickens. Mr. Lewis had a love of school and learning, and eventually those pursuits put him in the orbit of the SCLC and Dr. King. 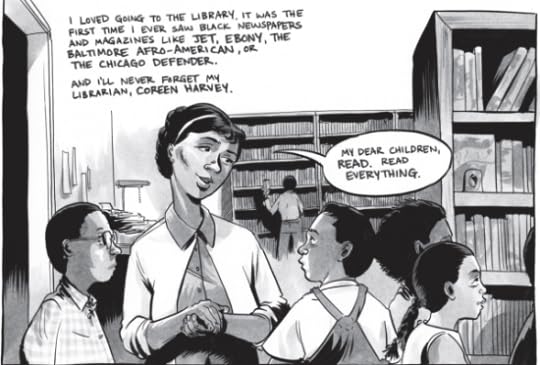 This first book chronicles those early stories, placed against the backdrop of President Obama’s 2009 inauguration, through the initial sit ins Lewis participated in and helped organize. Then as now Representative Lewis was a man on a mission, and I am looking forward to reading the next two volumes to follow his story in his own words in this highly accessible telling.