> FAQ Home
> Genre: Fiction > “Because there are 176 definitions for the word loser on urbandictionary.com. Don’t Be a Statistic.” 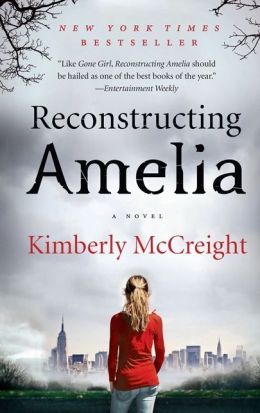 Of course, Reconstructing Amelia gets compared to Gone Girl on the cover (what hasn’t, at this point?). It definitely will appeal to people who like the twists and turns of Gone Girl, although it’s not as well written and, despite being about a teenager’s death, not nearly as dark, in my opinion.

“…[E]ven I know that being a parent is awful ninety-five percent of the time…As far as I can tell, it’s that last five percent that keeps the human race from dying out. Four parts blinding terror, one part perfection. It’s like mainlining heroin. One taste of life on that edge and you’re hooked.”

Amelia seems like a normal teenager — she fights with her mom occasionally, but she gets good grades and seems to get along with her classmates. Then one day, her mom (Kate) gets a call down to the school — Amelia has been suspended for cheating on a paper in her favorite class. When Kate arrives at the school, it’s surrounded by police cars — Amelia jumped off the roof to her death. Weeks later, trying to recover from her daughter’s suicide, Kate gets a text message: She didn’t jump. The rest of the book consists of Kate trying to reconstruct her daughter’s life, putting together texts, Facebook entries, emails and other electronic messages — all in an attempt to understand what happened to her daughter. She uncovers a lot of information, most of which just create more questions.

The detective bits of the book move quickly, and I got pretty hooked on what would be revealed next. Amelia had a lot of secrets (a boy who texted her constantly, a high school club she’d been tapped for, a student she had started an affair with), and Kate has her fair share, too. There’s also a school blog, written anonymously, that appears throughout the book — the identity of the writer came as a big shock to me. The book ended pretty much how I expected, but it took a lot of interesting twists and turns to get there.