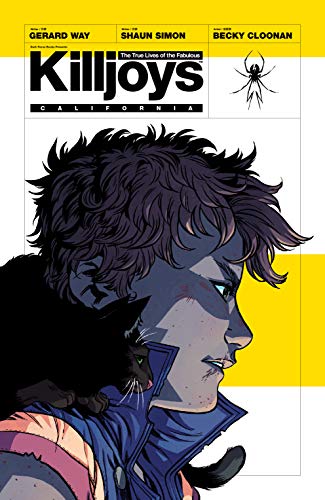 To put it as clearly as possible… There is something wrong with you and we are going to fix it.

I’ve been having kind of a Danger Days summer. This following my Three Cheers for Sweet Revenge spring and my Black Parade winter. What can I say, when I discover a band I am sometimes prone to musically hyperfixate. So the thing about this review is that it is taking quite a lot of self restraint to keep it as a review of the book and not an info dump about the late 2000s/early 2010s period of the band My Chemical Romance. Good luck to me.

The story encompasses a trio of threads:

The most important thing about this book is that it features a character giving themself a gender upgrade haircut with a sword. That is objectively cool and I will fight anyone who says otherwise (I will not please don’t hurt me). The second most important thing about this book is that it features protagonists who don’t really know what they’re doing or where they’re going. Of the main cast, the only one who seems to know what they want to do for sure is Val, the leader of the new generation of Killjoys, and he is a giant asshole about it. Everyone else is paralysed by their various feelings of guilt. Survivors guilt, years of built up guilt over actions, or guilt over feeling like you cannot save those you love.

These feelings of knowing something is coming and not knowing your place in it can’t help but resonate for me. I found the atmosphere of the early portions of the book, the tension and the space to be the strongest parts. Once the story starts to head to it’s resolution, I found myself a bit less interested in the plot, a bit unsure how several of the characters had gotten to some of their decisions. It wasn’t terrible by any means, but it felt like there was an extra issue’s worth of character work that got lost in an edit (the book is a collection of a six issue run).

One thing that doesn’t drop in quality at all is the art by Becky Cloonan. Her work throughout sets a great tone and really complements both the story and the music that the story is drawing from really well, handling both the loneliness of the desert and the action. I will say, that organising my thoughts for this review have bumped it a star in my reckoning. Whilst I was initially colder on the whole thing, once I had felt the unity in tone of the three strands, and flipped back through and looked at the art again, I came away more positive.

The future is bulletproof, the aftermath is secondary, it’s time to do it now and do it loud. Killjoys, make some noise…