Registration Is Open! Sign Up Today
> FAQ Home
> Genre: Non-Fiction > Frustrating and disappointing on the whole 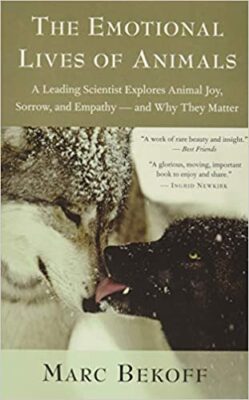 Ever since I read Animal Wise by Virginia Morell, I’ve been looking for more of the same. Morell’s book was eye-opening and fascinating. I hoped I had found something similar when I saw The Emotional Lives of Animals (2008) by Marc Bekoff. With a foreword by the amazing Jane Goodall, and a topic right up my alley, I began it with high expectations. Unfortunately, I still have not found a book that rivals Animal Wise. Although I agreed with most of Bekoff’s arguments, I was often frustrated by a lack of detail and discussion.

On the positive side, Bekoff seems like a kindred spirit. Not only does he live and work in Boulder (my hometown), but we both have a lot of interest in–and empathy for–all animals (humans included). I was impressed that he went against the grain as a scientist who chose not to do any experiments that harm animals. I always cringe when I read studies that involve hurting or depriving their subjects, even if the findings are interesting. I also agreed with his argument that animals feel emotions such as pain and joy, and that we should try to limit the amount of suffering we inflict on animals today.

At the end of his book, Bekoff goes over the three areas where we can make the most improvement. These include laboratory experiments, food industry, and zoos. He’s not dogmatic but points out that we can reduce suffering by using fewer animals and improving conditions. In addition, zoos justify their existence by saying that they promote knowledge and conservation of the animals in their care, but there is no real evidence that people who visit zoos care more about conservation. I stumbled upon a Youtube channel, WildEarth, that livestreams jeep safaris for three to four hours every morning and evening in South Africa. Because it is live, sometimes there is not much to see, but when that happens the guides talk about the land, animal behavior, and anything else that comes to mind. Seeing animals living and surviving in the wild along with the expert information from the guides has taught me more than I would ever learn at a zoo. And now when I’m at the zoo, it is a letdown compared to seeing animals move and interact in the wild.

Bekoff has a simple request when it comes to improving animal welfare: “ask yourself, how do my current actions affect other animals, and what can I do differently to care for animals better?” (166) I think those are good questions to ask.

Now, I also found myself getting very frustrated when I read this book. This most commonly happened when I felt that Bekoff did not back up his statements or he was sloppy when using examples to prove his point. At the very least, I felt Bekoff needed more information to give some kind of context for some of the things he was saying. And instead of going into more detail where it was needed, he would repeat the same general statements over and over.

For example, Bekoff stated a number of times, “[w]hen animals express their feelings they pour out like water from a spout. Animals’ emotions are raw, unfiltered, and uncontrolled. Their joy is the purest and most contagious of joys and their grief the deepest and most devastating.” (19) First of all, this statement is not supported by anything in the book. Second, I would argue that it is simply not true and does a disservice to both animals and humans. Humans can have unfiltered emotions. This can easily be seen in children, but adults as well. Also, animals can be more sophisticated than simply broadcasting their every emotion to everyone and everything around them. Birds do this when they pretend they are not sick, and chimps do this when they pretend they are not excited when finding a secret food cache.

Although I one hundred percent agree that animals have emotional lives, I wasn’t impressed by Bekoff’s examples. He used lion anecdotes when discussing animals feeling empathy. Lions are not the first animal I think of when I think of empathy. Specifically, he said that a “lioness adopted a baby oryx, usually a lion’s favored meal.” Unfortunately, he included no other information. After some googling, I discovered that there was a lioness in Kenya (probably the same one, but I’m not sure) who was separating baby oryx’s from their mothers. Scientists and rangers could not understand this aberrant behavior, but they usually intervened before the baby oryx starved to death. By the fifth time, they let nature take its course. The baby starved to death and the lion ate it. I think this was some kind of maternal instinct gone awry, and it is not typical or normal behavior. It did not prove his point and was frustrating in the lack of detail. Why not use examples of African wild dogs caring for injured members of their pack or even lions allosuckling their sister’s cubs. Or what about the stories of dolphins protecting surfers from sharks. There are so many good examples out there, why bring up one that is atypical and doesn’t really show empathy.

This kind of thing happened throughout the book, and I was consistently frustrated. Whether talking about the play behavior of dogs and then using an example where one of the dogs exhibited none of the play behavior characteristics he had just discussed, or using well-known examples from the 1960’s for reasons against animal testing today, I almost always felt that there was a better example and/or I needed more information to understand the point he was trying to make. I finished rather frustrated and disappointed.

You can find all my reviews on my blog.