> FAQ Home
> Genre: Comedy/Humor > “One night. I just want one night of sleep”…”Is it that too much to to ask? One night where I don’t have to babysit or dig up a corpse?…” 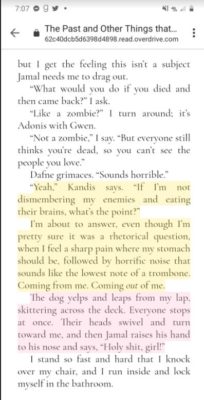 Part of my Simon and Schuster publisher online finds included The Past and Other Things That Should Stay Buried by Shaun David Hutchinson. A mouthful of a title that almost hides the plot of this young adult novel. The Past is a messy, quirky, simple and a modern teen novel. Even the unlikable characters can be likable. This is mostly since you can sympathize with what is going on, even if you have never been a reanimated, dead, best ex-friend. (Images are three of the five sections I might have laughed a bit too hard at. Title is a line by Dino.) 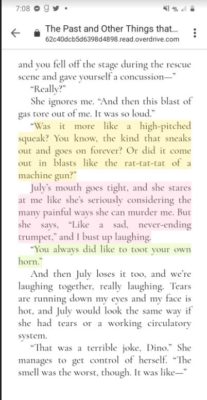 Yes, you read that correctly. Dino’s best ex-friend July has come back from the dead. But not as a brain eating zombie (or so they are assuming) but as a in denial, pushy, not-dead/not-alive being. Dino and July alternate chapters telling their story. They learn about each other, why July is not dead, why anyone who should die is not dying after July “wakes up” naked, under a sheet fresh right from the freezer, and both gaslight a sort-of friend. There are boyfriends, siblings, parents, a wedding, finding first loves, friendship woes, farting, and the family business that is a mortuary.

Dino and July spend several days, mostly not letting July’s existence known (after, it would be a bit awkward to explain how the paramedics, doctors, coroners, and the morticians did not realize July was not dead). Dino and July examine their past friendship, their feelings, fears and even find a little understanding about where they should go and what they should do with themselves (July, of course, to go back to being dead and Dino to tell his folks, he might be good at helping in the family business, he does not want it to be his business).

The humor can be forced at times, and be cliched (but,  yes, as I said,  I laughed until I almost choked after July does what happens with gas after you are dead) but it was also comforting. There is one serious scene, that almost feels like it is in the wrong book but does shed some light on the whys of death (and it is a lovely, if not (understatement) sad, description of the feeling of depression). There are a few “pat moments” or um….why did that get in there? Is it really really needed? moments, but overall, the story is decently presented. I can see this adapted into a Netflix show. Teens ages 13 and up would enjoy best though a mature 12 and up could do as well.