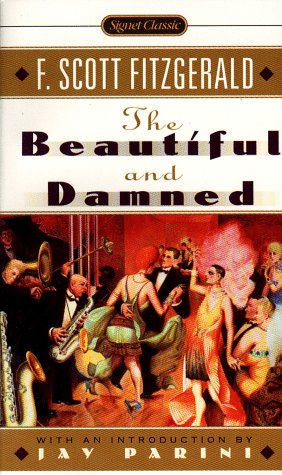 The Beautiful and Damned was Fitzgerald’s second novel, published in 1922, and it is the novel that propelled him into the literary elite. He and Zelda had firmly settled into their marriage, and their only child, Scottie, was born prior to the publication of this book. It was a good time in the Fitzgerald house.

Going into this novel, my assumption was that this was going to be about a wealthy young man who falls in love with a mercurial and mysterious woman. Following a whirlwind romance, they fall into a dispassionate and tumultuous marriage that ends in tragedy. I assume that’s what all this novels are.

While I was correct about the basic outline of the plot, I was absolutely wrong about that being “all his novels are.”

I loved this book far more than I ever would’ve guessed. F. Scott Fitzgerald writes beautifully without ever feeling unreachable. The pretension of good writing can sometimes fail to hold my attention. Instead of getting lost in the flow and unexpected twists in language, my mind detaches and drifts aimlessly around and between the words that no longer have meaning. I get bored easily.

I think this is why I generally stay away from literature, and instead am more comfortable in the realm of popular fiction and nonfiction. It’s not that I don’t like good writing, it’s that I find it distracting and intimidating.

But there is truth, here. The truth of love untethered – unconstrained by the boundaries of maturity and friendship. Anthony and Gloria aren’t right for one another, but they are irrevocably drawn to each other. This book is about how that passion burns itself out, and how the torment of a long slide towards apathy leaves them as faded shadows of their former selves.

The Beautiful and Damned isn’t some paean to Jazz Age excess, it’s a lament to two imposters who see themselves as privileged members of the elite, while actually being relatively poor, indolent alcoholics who can’t let go of the past. According to the Wikipedia article on this book, critic James West claims this book is about “vocation — what does one do with oneself when one has nothing to do? Fitzgerald presents Gloria as a woman whose vocation is nothing more than to catch a husband. After her marriage to Anthony, Gloria’s sole vocation is to slide into indulgence and indolence, while her husband’s sole vocation is to wait for his inheritance, during which time he slides into depression and alcoholism.” I think this is largely correct – except I don’t think Gloria’s vocation was to get married. I think her vocation was to be loved, and to be who she was without being constrained by the expectations of men or society. She didn’t really exhibit “marriage” as a goal early on, and she actually seemed disinterested in Anthony, at times.

Which is what really drew me in. The back and forth between Gloria and Anthony – him chasing her, her allowing him to catch her before expressing disinterest – was what cemented this as something more than I had expected. There were so many parts of this book that reminded me of relationships I’ve had, and these bittersweet recollections gave the story a level of pathos that I don’t think I would’ve felt otherwise. I loved this book because so much of it rang absolutely true to me. Which I think can only be true after experiencing enough of the currents of life to see how they often don’t drift the way you’d like them to. It’s the inevitability of failed expectation that touches my soul, here, and the disappointment that both Gloria and Anthony find in both themselves and one another.

The beauty of this novel, for me, lies in the missteps and disconnect between Gloria and Anthony. It is the moments when their love isn’t enough to sustain them that I recognized the timeless brilliance of the book.

This book exemplifies what I love so much about art. It was published a century ago – and I just discovered it. There is so much brilliance in the world – and it’s never too late to experience it for the first time. I “discovered” Moby Dick a few years ago, and I still regard it as one of the best books I’ve ever read. I “discovered” Crime and Punishment when I was 14, and it got me into reading. There is real timelessness in art, and there’s no expiration date for when it will impact you.

I’ve known Gloria’s in my life. I was too bewildered by their mystery, or I didn’t know how to handle their independence – whatever the reason, I never became their Anthony. For that, I am eternally grateful, because this isn’t a healthy relationship. Though I’ve never been abusive, or an alcoholic, and I think I’ve always encouraged my partners to pursue whatever paths their interests might take them – I recognize the despair and confusion of their courtship. This was, in a way, a very personal read for me.

And the truly mesmerizing thing about this novel is knowing that much of it was based off of Scott’s marriage to Zelda. I wouldn’t have been able to tell you much about Scott and Zelda Fitzgerald prior to reading this – but I’ve become a little obsessed since. Zelda Fitzgerald is an absolutely amazing person, and I won’t be surprised if I seek out a biography in the future. I’m tempted to read her book (Save Me the Waltz, but it seems as though her writing may be a tad indulgent – and she wasn’t in a good place when she wrote it).

To some degree, there’s a perversity in the reveling in the misery of others. With that said, it was hard to not pick up The Great Gatsby before finishing this book. But I don’t know how I’ll be able to read anything else after this.