> FAQ Home
> Genre: Comedy/Humor > A Dandelion by any other name probably wouldn’t be a dandelion, but these ARE great poems 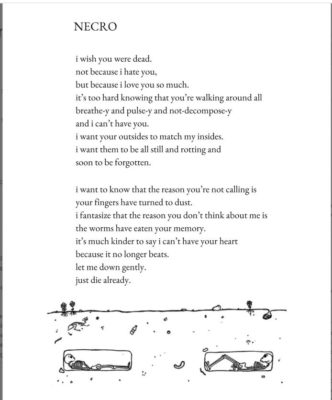 I did not enjoy Dandelion as much as the first poetry collection by Gabbie Hanna. However, the poems are still as raw and a deep look into one person’s journey. The only reason I am not as “into” this one is that they are more of the same. Adultolescence had themes seen before but done in a humorous and serious manner simultaneously making them fresh. Dandelion does that as well but leans more towards a few more serious poems in tone. This makes them a smidgen less “fresh.” It is a second book. Good but maybe not the “best ever.” This, however, did not stop me from highlighting lines, passages and even marking a whole page with THIS! (Meaning THIS poem. All of it.)

Hanna deals with life, fear, anxiety, depression and even assault. Yet, nothing is “too much” to deal with. Almost every poem is no more than a handful of stanzas. One is even just one line. Hanna also has “essays” about what inspired some of their works, where they came from and even where they might be going.

The illustrations are stories in themselves. They are sketches in a classic and modern format at once. There is a uniqueness that feels comfortable. They are there to say, “pay attention” to what is going on. Sometimes they accent one of the poems and sometimes they are a new one. They are simple but have a punch. They are beautiful and plain.  As with the text, there is a lot being said all at once, without a lot of clutter.

Aimed at adults, this is a 14 and up collection. However, younger teens might be okay if strong, mature readers. And while I say they are a writer for women, I would love to see males read to see how they relate to the themes. And while it might not be for the person who does not like modern works, if you want to be introduced to poetry and not into traditional, Hanna might be a good place to start.

Note: these images are from the internet. They do not do the book justice (In my eyes at least  as I’m assuming two of my favorite images (the backside of a woman on one side and her front on the other in a most “birthday suit way”) is not consider “appropriate”). 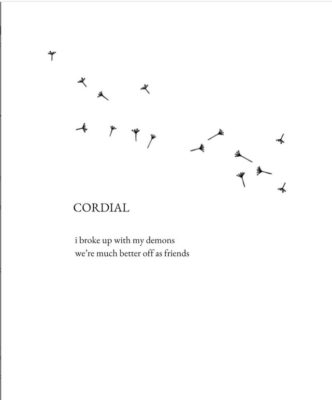