> FAQ Home
> Genre: Fiction > If wishes were horses, beggars would ride. But they’d still be charged. (CBR12Bingo2: I wish)

This is a really weird book for the “I Wish” square on its face, given that it involves a dead sister, an alcoholic best friend, a stalker, an even larger economic equality gap, and the ennui that comes from the hedonic treadmill rendering the magical prosaic.

But you guys, it’s about teleportation!

Can you imagine getting BORED of being able to instantaneously port to a tropical island? To hem and haw about having an outdated teleportation device, or having to pay a teleportation bill in the same way you bitch and moan about the electric or water bill? It seems impossible, but when we pay our electric bill we never consider how magical it is that we can turn on a light or a microwave or a television whenever we want; we complain when the water bill is due but never think about previous generations not having access to clean water, much less clean water that comes out of the wall with the push of a handle. The beauty of Magary’s book is that he doesn’t just imagine what teleportation could bring, for better or worse. Like all the best science fiction, he imagines a world where advanced science is so entrenched that it has become mundane.

Anna Huff is obsessed with finding her sister Sara’s killer, which is difficult from Druskin Academy, a prestigious school where PortPhones are banned and teleportation results in immediate dismissal. Her new roommate, Lara Kirsch, is the daughter of the head of the PortPhone company and the sister of the technology’s inventor. When she disappears, Anna has to track her down, in part because she’s fallen in love with her.

It’s a great story, but one that I really wish had an editor. I’m pretty sure this was self-published (which, holy hell, if DREW MAGARY can’t get a publisher with a story this good and name recognition from years with Deadspin, what hope is there for the rest of us).  The second half of the book drags a bit. Lara and Anna have a believable instant bond, but I had a hard time accepting that she’d put as much at risk for Lara when Anna has known her LESS THAN A DAY.

But that’s me nitpicking a book I thoroughly enjoyed – I particularly loved the asides from journalists covering PortSys conferences, the accidental teleportation deaths, the world building, and kind of wished Magary had focused more on that than (an admittedly affecting and refreshingly normal same-sex) love story. But, that’s just me, in a meta touch, whining about the magical. 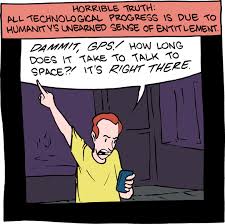