> FAQ Home
> Genre: Biography/Memoir > “‘You never forget a beautiful thing that you have made,’ he said. ‘Even after you eat it, it stays with you – always.” 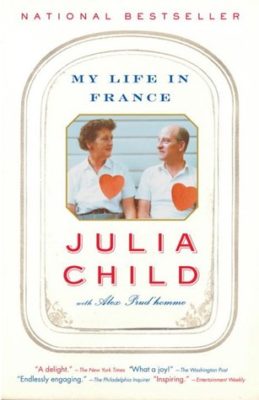 This was such a lovely reading experience, for lots of reasons. I felt refreshed while reading it, and afterwards. I’ve since made a little hobby of revisiting old episodes of The French Chef on YouTube because they are calming and delightful (and I can make a French omelet now!).

I spent a lot of time in my childhood watching PBS because my dad was cheap and wouldn’t pay for cable, so that meant lots of Julia Child. I remember not caring so much about the food but loving how goofy and unpretentious Julia was as the host. I loved the timbre of her voice. It was simultaneously over the top and soothing. I remember loving it when she messed up, which happened often, and she just owned it. Anyway, except for watching Julie & Julia twice (the Julia parts are far superior to the Julie ones) I’ve barely thought of Julia Child since I was a kid, and that turns out to be a shame.

This is a memoir of Julia’s life, focusing largely on her time spent in France (if the title didn’t give it away). She and Paul lived in Paris for about a decade after WWII, which is where Julia fell in love with cooking, and with France itself. The majority of the book, about 60%, chronicles those ten years as she discovers herself relatively late in life, her marriage with Paul (which is #relationshipgoals), and the development of her career as a cook, a bestselling author, and a TV personality. Her love for food, her husband, for France, just falls off the page. She’s very introspective as a writer (although, the book was co-written with her nephew Alex Prud’homme, so I’m not fully clear on how much of the book was influenced by him).

I knew I would enjoy learning about Julia’s life, and the endless descriptions of rich, delicious foods that I’m sure would make me very ill if I ate them (sad tummy), but what really surprised me is how much I enjoyed this book as a sort of historical document. There are some instances where she quotes letters written at the time, but it’s not a true primary source document because it’s mostly told from her recollections. (Apparently someone published a book of letters between Paul and Julia, though, which I might be interested in reading–they both had terrific senses of humor and were very intelligent people. Nora Ephron used these letters as a source for Julie & Julia, and one of them has one of funniest and raciest lines in the film.) But, still, the insight into post-war American (and French, obviously) culture was fascinating. Julia’s fraught relationship with her very Republican father felt extremely familiar, and she often muses on what was going on politically at the time, because it affected Paul’s job.

Overall, though, what you get when you read this book is a sense of a life well lived, full of learning and love and cooking. Julia Child seems to have been a person who did things because she liked them, and not for many other reasons. Her love of teaching on TV took her by surprise, as did her passion for cooking, but she ran with it, and her enthusiasm and hard work carried her through. I highly recommend reading this, even if you aren’t at all familiar with Julia Child.

Also, did you know that garlic soup (Aigo Bouido) is a thing? I’m going to make some, but first I have to master Julia’s recipe for mayonnaise. As much as her career was based on encouraging Americans to cook things from scratch, she was also very practical, so I’m sure she wouldn’t really mind, but I would still feel bad using Best Foods or whatever in her recipe. Garlic soup!