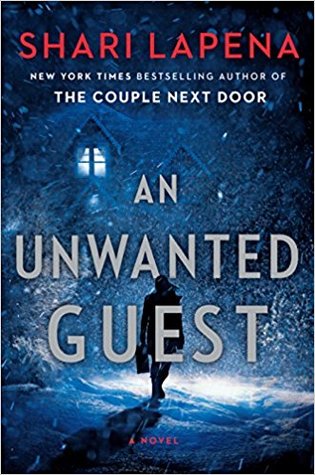 This was probably two and a half stars, but I’m rounding up. The story was decent but pretty predictable.

An Unwanted Guest takes place in a small family-run inn on a night when the weather is so bad that all the guests are trapped inside. They lose power and the roads are unpassable. Unfortunately, that’s right around when people start dying. First, the beautiful engaged woman falls down the stairs. Everyone suspects her fiance until an author working on her latest book is found dead as well. From there, no one can be trusted.

“Is someone else dead? She wonders if soon there will be no one left at all. She wants to live, but she hopes that if she has to die, she isn’t the last one. She doesn’t think she could bear it.”

The other characters in the book are made up of an unhappy couple on the verge of divorce, two women trying to rekindle their friendship (although one is obviously suffering from PTSD and the other one sort of abandons her to get laid), an attorney, a boyfriend / girlfriend couple, and the owner of the inn and his son. A lot of these people have really terrible backstories that the author reveals a little bit at a time. I think this was meant to provide some red herrings. Unfortunately, it doesn’t really work. The book is told in third person omniscient narration style, and of all of these characters, one person’s perspective and back story isn’t examined as closely as any of the others. So I found it pretty easy to figure out who the bad guy must be.

Regardless, it’s a decent thriller with a good creepy set up out in the woods, and if you’re looking for something to pass the time while you’re getting your nails done, you could do a lot worse.

(3 stars) The Turn of the Key by Ruth Ware

I didn’t realize it until I went to write the reviews, since I read these books a couple of weeks apart, but the next two both have a common theme of millennials being in such a shitty spot financially / professionally that they accept the kind of job that you know is too good to be true and will totally end up with your dead body at the end.

“The ghosts, she had sobbed. The ghosts wouldn’t like it.”

In The Turn of the Key, Rowan takes a nannying job that pays extraordinarily well. The circumstances are a little strange — maybe the house is haunted? Or maybe the children are evil? Nannies keep disappearing, but the money makes it worth it for Rowan to spend her days entirely alone in an enormous house controlled by electronics while nannying three children whose parents leave for work almost immediately after she’s hired. A fourth child, a teenage girl that I could only picture as Xanthippe from The Unbreakable Kimmy Schmidt, appears in the narrative later.

“People do go mad, you know, if you stop them from sleeping for long enough…”

Of course things go terribly wrong. The house allows its owners to spy on her, while lights and music turn on at weird times during the day and night. There’s a mysterious groundskeeper (because of course there is) who reveals little bits of information about the house and the family. And Rowan finds mysterious notes from her predecessors that lead her to believe that she’s not safe. It’s full of twists and turns. I will say at least one of the reveals caught me completely by surprise. I always get in line right away to borrow Ruth Ware books and they almost never live up to the hype, but I will say this is probably one of her better novels.

​​In another too-good-to-be-true scenario, the main character of Lock Every Door is offered a dream job. An apartment in the famous high-rise the Bartholomew has become vacant, and due to the building’s rules, a house-sitter must be hired to stay in it at all times. Jules is paid $1,000 a week to stay in the Bartholomew, although she must agree never to have any visitors and never spend any nights away from the apartment. Despite her friend’s misgivings and rumors about the old building, she eagerly accepts. Within just a few days, she’s recovering from horrific injuries in the hospital.

“I’m sure someone would say it’s my own damn fault. That it was my responsibility to build an emergency fund. At least three months’ salary, the experts say. I would love to backhand whoever came up with that number. They clearly never had a job with take-home pay that barely covers rent, food, and utilities. Because here’s the thing about being poor-most people don’t understand it unless they’ve been there themselves.”

The book alternates between her first few days in the Bartholomew and her time recovering after her injuries. The plotting on this was pretty good. I was definitely taken in by some of the red herrings and surprised by some of the reveals. My main complaint with this novel, and with Sager’s other novels as well, is that this man apparently has never heard actual human people talk. The dialogue in this book is atrocious. Just so overwrought and unbelievable. But the story itself is good and I really liked how it was obviously written for a millennial audience. Jules’s family suffered a horrific medical crisis that their health insurance wouldn’t cover. She herself struggles with credit card debt and and an uncertain future. Personally, I would be hard-pressed to turn down free rent and $1,000 a week, even if I knew I would end up in the hospital for it. That part brings a lot of realism to what otherwise would have been just way too over the top.