Calling all Cannonballers! Submit Your Best/Worst of CBR14 by Saturday December 10!
> FAQ Home
> Genre: Fiction > Kissing book round up

Ordered from meh to wow!

So this was probably the first Christina Lauren that I didn’t particularly enjoy. It wasn’t bad, it just wasn’t as good as the others I’ve been devouring this summer. A certain amount of disbelief must be suspended when reading book like this, so I didn’t mind the set up in the beginning — I just wasn’t all that wild about how it ended.

“Is Jeff right? Am I unable to create anything because I see myself in a supporting role? Doomed to always be the friend, the daughter, the linchpin in everyone else’s story?”

Holland Baker has been obsessed with a subway busker for months (she calls him Jack until she finds out his name is Calvin). So when the opportunity arises to offer him an audition with her uncle’s Broadway musical (which will also help her uncle immensely), she jumps on it. And when the only obstacle to getting Calvin hired on is his expired Visa, she does the only logical thing (in a romcom, that is): she marries him.

Of course, as they’re shoved together in marriage, Calvin and Holland eventually begin to really care for each other. For me, this was the weakest part of the book. The more they revealed about themselves, the more lies came to light and the less I liked either of them. I did enjoy the other aspects of the book though — Holland’s uncles and their love for her (and music) were warm and inviting. And there’s a subplot about a toxic friendship of Holland’s that’s handled really well. I just wasn’t really on board with the romance part of this romance novel.

As recommended by the Fug Girls! It was okay, but definitely not as good as their book, The Royal We. Go read that instead. But if you do want to try this one…

American Royals exists in a world where instead of being our first president, George Washington was our first king. Set in modern times, the novel focuses on the three children of the current king and queen. Beatrice will be the first queen reagent, when her father passes away — a role she’s been preparing for her entire life. And her two siblings, twins Samantha and Jefferson. Samantha has existed in her sister’s shadow for her entire life, while Jefferson seems to enjoy the perks of being royal without any of the responsibility.

Despite the unique AU this story takes place in, it’s really pretty predictable: Beatrice falls in love with a commoner but is forced to date someone approved by her parents. Samantha hates her sister until realizing how hard things are for her. And Jefferson gets into a relationship with Samantha’s friend, resulting in paparazzi stalking them and his ex-girlfriend sabotaging them at every turn. I did enjoy the background, and the logistics of an American royal family — but the stories set against this background were not particularly interesting or revolutionary.

(4 stars) Love and Other Words by Christina Lauren

This one I really liked — probably because the idea of a cute but nerdy boy next door falling madly in love with me and wanting nothing more than to talk to me about books is pretty damn appealing. But I also liked the structure of the novel, and the gradual lead up to a reveal that truly surprised me.

“I had no idea who Real-Life Elliot was. My Elliot existed only on certain days, only in the confines of our library closet.”

Macy Sorensen and Elliot Petropoulos were incredibly close as children — he lived next door to her father’s weekend home, and became the only person Macy could talk to about her mother’s death. Their relationship evolved as they go older, until something happened that caused a massive split. 10 years later, they run into each other and Elliot is determined to rekindle their flame — he breaks up with his girlfriend and begins pursuing Macy (who’s engaged!). But he doesn’t know the whole story of their split, and Macy can’t bring herself to tell him.

I really liked how Christina Lauren handled the reveal of the story behind Macy and Elliot’s fight — knowing that something happened while it’s being slowly teased to the reader was a great hook. And I loved their childhood friendship — they bond over books and words and that’s always catnip for me. This was definitely a good read. 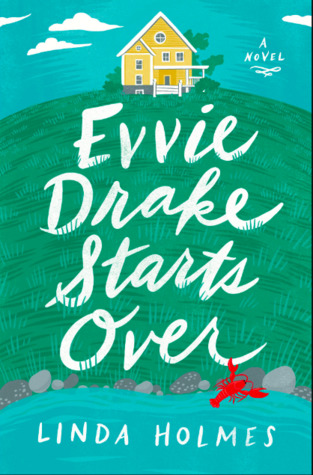 I really enjoyed this novel. I liked the structure and the pacing of it, I loved the community it took place in, and I thought that the banter was very fun and witty. I literally laughed out loud during multiple portions of this book.

Evvie (rhymes with Chevy) Drake was in the process of loading her suitcases in her car to leave her emotionally abusive (yet adored by the entire community) husband when he died in a car accident. So for the last year, she has been doing her best to fake grieving while internally beating herself up for being a “monster”. She’s forced to attend memorial services and scholarship ceremonies in honor of her dead husband, who gaslighted her and pushed her around for the entirety of her marriage. Worst of all, she can’t even talk about it to her best friend Andy, since she’s never told a soul what she went during her marriage or that she was on the verge of ending it when her husband died.

Meanwhile, Andy’s best friend Dean, formerly an incredibly popular and successful major league pitcher, is undergoing a case of the Yips. He has suddenly lost his ability to pitch, and everyone is convinced that he’s either a head case or just not trying hard enough. In an effort to give Dean a little relief from the media, and Evvie some financial support, Andy convinces her to take Dean on as a tenant in her extra apartment.

You will not be surprised to find out that Evie and Dean eventually fall in love. But man, the journey getting them there is just fantastic. I love how they got to know each other, how they drew each other out of their respective shells and also how they were genuinely hurt by each other’s actions and secrets. I adored Evvie. She has this way of telling a story that just completely drew me in and it’s obvious that Dean feels the same way. I listened to the audio version, by the way, and I would highly recommend it. For one thing, I’m a sucker for a Maine accent and Evvie’s father the lobster man brings a lot of that to the table. But just listening to her talk makes her sound so incredibly realistic.

I also loved the dynamic between her and her best friend Andy. Evie swooped in to help Andy after his wife left and while they’re as close as two people can be, there is not a romantic aspect to their relationship.

Plus it’s funny! It’s a funny book. Go read it.