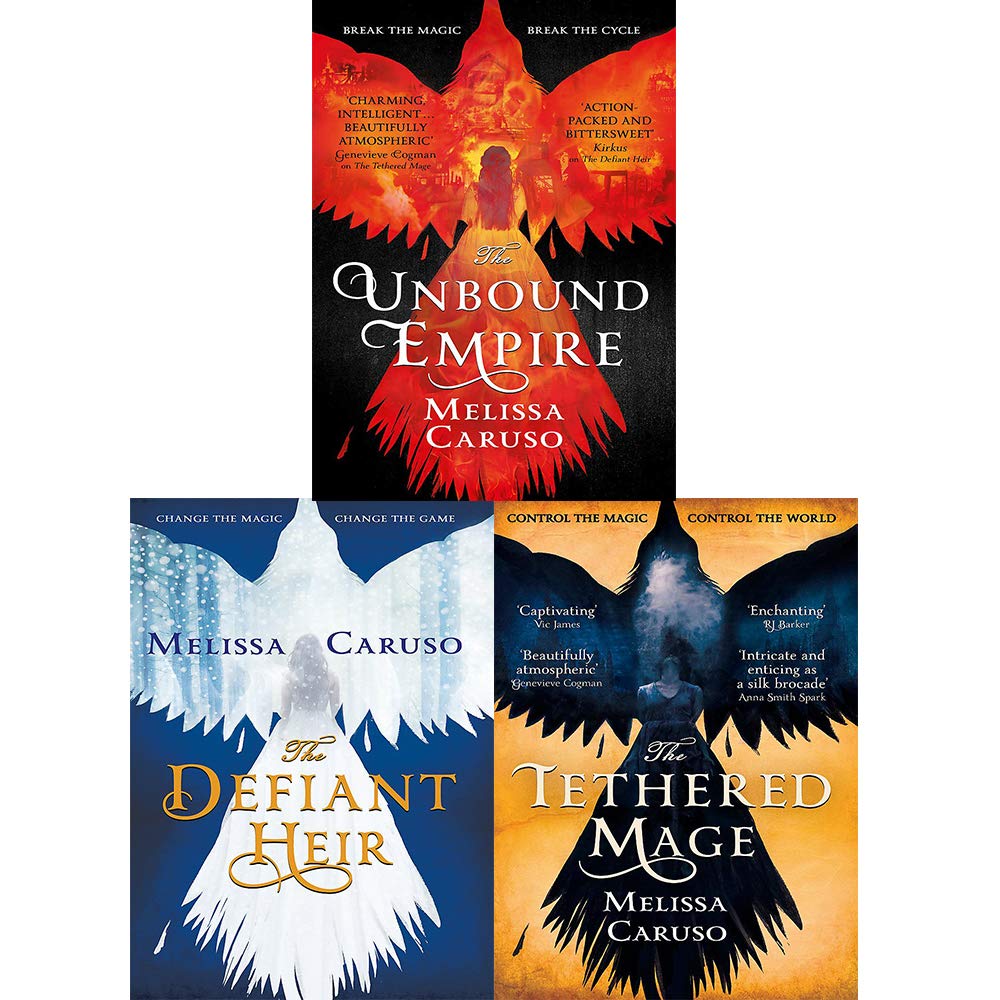 Bingo Update: I’m using this for the Travel square. Each of these books centers around journeying from the protagonists home city (and center of the Empire) Raverra. It takes them to other places within the Empire (Ardence, Callamorne, Highpass) as well as key locations in the invading Vaskandar (Sevaeth, Kazerath, Let, Atruin). How quickly they can or cannot travel is also plot significant, as it relates to our heroine’s ability to stay alive as well as prevent ruin of her nation. The notion of “home” also figures heavily into the story, as Amalia misses it when she isn’t there, but Zaira has never felt like she really had one (the latter of which motivates an enormous set of plot points).

I tore through this entire series in about 3 weeks. While they are not Sanderson-esque in length, neither are they terrible short, so believe when I say I was driven to keep reading.

The Swords and Fire Series is comprised of three books, which I will attempt to speak about separately for spoilers’ sake.

First up is The Tethered Mage. This book introduces us to the world of Eruvia, a land governed by a classical Italian styled government from a city called Raverra, very clearly modeled off Venice. Our protagonist is Lady Amalia Cornaro, heir to the intimidating and powerful La Contessa, who sits on the Council of Nine. The Council rule the nation alongside the Doge. Magic exists in this world, but in Eruvia, it is monitored and controlled. Those with extreme magical gifts are the mage marked, so called due to the ring of color in their eyes. Mages of lesser ability exist, but are largely left alone. The mage marked, however, are made to be Falcons, conscripted to the military, kept together in one location called The Mews, and tethered to a Falconer by the means of an artifice device known as a jess. They are treated exceptionally well, but a cage is still a cage, and many resent this, including our secondary protagonist, Zaira. In a freak set of circumstances, Amalia comes to place a jess of Zaira to prevent her from burning down the city. Zaira’s mage gift is that she is a fire warlock, capable of releasing nearly endless amounts of magical balefire. The Falconer on site cannot jess her, since he has already been partnered to a Falcon, forcing Amalia to take action or watch the destruction. However, noble families connected to the Council are not supposed to be able to also be Falconers – it’s too much power in one place. However, Zaira’s jess has fused shut and the die is cast.

This is simply the opening of this book. From there comes a plot of two people trying to figure out a friendship sprung from bondage, deception within the ranks of the Council contributing to a threat to the city of Ardence, and the introduction of a potential threat from their neighbors to the North in Vaskandar. This book also takes the time to set up one of several romantic interests in the friendship between Amalia and Marcello, the Falconer who got her into this mess to begin with.

I loved the world building here. Eruvia mixes enough history with its magic to make everything feel plausible, but not quite like reality. There’s some redundancy in the prose and, personally, the mystery wasn’t that hard to crack, but neither bothered me. If you’ve read any of my reviews, you know that character is key for me, and I love everyone in these books. From Amalia down to Ciardha, her mother’s aide/bodyguard/whatever she needs to be, all of these people feel fleshed out and their relationships feel very lived in.

SPOILERS FOR BOOK 1 BELOW

The Defiant Heir picks up not long after the events of the first book. Ardence is safe and under new leadership, Zaira and Amalia have formed a tentative bond, and Zaira has moved Marcello firmly into the “can’t happen” camp, due to her position. Something is amiss on the border near the mountain; Vaskandran forces seem to be up to no good. Amalia is not surprised by this, having interacted with Ruven, heir to the Vaskandran domain of Kazerath. He’s a nasty piece of work, and Amalia suspects that the books on magic and vivomancy that Ruven was studying can lead to no good. She, Zaira, and several others are sent to Callamorne, land of Amalia’s deceased father, fierce grandmother, and two delightful cousins. From there, they are destined for the fort of High Pass, where everything goes awry. Prior to this journey, Amalia begins a courtship with another Vaskandran, Lord Kathe of Let. The Crow Lord is an invaluable, if inconsistent, ally, and Amalia hopes to utilize this relationship to attend The Conclave, a meeting of Vaskandran witch lords that has never had anyone from the Serene Empire in attendance. She hopes her presence there can help dissuade the witch lords from going to war with the Empire.

The most important part of this book is, again, not plot for me (although the plot of this one is twisty and dark and very good). This volume introduces and/or expands on some very key characters – Terika, Zaira’s girlfriend; Jerith and Balos, a married Falcon and Falconer that help train Zaira and Amalia; Istrella, Marcello’s Falcon and little sister (who reminds me endlessly of Entrapta from the new She-Ra); and most importantly, Kathe, the Crow Lord of Let. Look, I’m crazy about Kathe. It’s hard not to be. He charms the pants off of readers the same way he manages to charm Amalia (though an astute reader will trust him less than she does). Istrella adds dimension to Marcello, and Terika, Jerith and Balos not only soften Zaira’s edges, but help guide Amalia along her path to creating and championing her Falcon Reform Act.

SPOILERS FOR BOOKS 1 AND 2 BELOW

The Unbound Empire takes place a few months after the conclusion of the previous book. Amalia has largely healed from her injuries, though her trust in Kathe is damaged after his betrayal with the Lady of Thorns, and her heart is forever damaged by making the decision that killed her cousin, Roland. Amalia is growing up fast and quickly learning the lessons her mother has spent a lifetime trying to teach. Sometimes hard choices have to be made by those in power, and you have to maintain your compassion, but also possess and iron will. Amalia feels like she is losing part of herself, which is not helped by some of the early action of the book. Things go wrong very, very fast and very early in this one, and the pacing doesn’t really let up till the end. Ruven, although damaged by the results of the Conclave, is much like a cornered animal – his desperation for power and position fuels even more cruelty. He does some truly despicable things in the course of this book, and if it weren’t for Kathe, one might be inclined to say to the Hell of Damnation with the whole of Vaskandar. But Kathe is here to remind us that not all the Witch Lords look at their lands or their powers the same way. He has deep regrets about the way he used Amalia at the Conclave and endeavors to do better this time around.

Their courtship is a lot more interesting this time around, as their feelings develop and they learn to let each other in a little more. As two people of significant power, used to relationships fueled by usefulness and favors, it’s hard for either to trust the other’s intentions. Trust needs to be earned, and it is.

Trust also must be earned between Zaira and Amalia, who become genuine friends this time around. Amalia has worked very hard to see past her privileged bubble and use her power to work for change for others that really need it (a lesson more of us could learn). They open up to each other more emotionally, which gives Zaira permission in her heart to open up to others, like Terika.

I think this series ends where it needs to, which may not satisfy all readers. There are power and relationship shifts that may not please everyone, but pleased me and made the most logical sense. I’m excited to know Melissa Caruso is continuing to write within this world (and hopeful that some of my favorites might make cameos). I will definitely continue to follow her career as she writes the kind of fantasy I love to lose myself within.