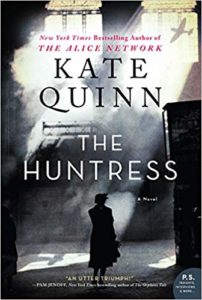 After reading Quinn’s previous novel, The Alice Network, I couldn’t wait to get my hands on her new book. I adore her way of portraying women in historical fiction – finding the badass women who are the heroines of the story, not the background players.

One part of this story follows the journey of Nina Markova, as she journeys from the wilds of the Soviet Union to Moscow, in order to join the Night Witches – a legendary group of female pilots, tasked with bombing the Germans under the cover of darkness. She is eventually faced with the decision to desert or die, and she flees to Poland where she encounters The Huntress – a brutal Nazi assassin who almost takes her life.

After the war, Ian Graham trades in his war correspondent journalist cap for that of a Nazi hunter, determined to search out war criminals and bring them to justice. At the top of his list is The Huntress, primarily because she is responsible for his brother’s death. Nina and Ian join forces, and their search takes them across the ocean to Boston where The Huntress was last seen.

Jordan McBride is a teenage girl living in Boston. Her widowed father brings home a mysterious new bride, and while Jordan really likes her, there are so many pieces of her story that are raising red flags of suspicion.

Most of these details are revealed at the beginning of the book, so that’s not too spoilery, although it’s pretty obvious as to the direction this is going. 🙂 Even with the mystery of Jordan’s stepmother being super obvious right from the start (to the point that I was waiting for a twist that revealed something different), this was still a really suspenseful and captivating historical drama. The Nina story arc especially – I learned so much about the lives of these amazing female pilots and was so heartbroken over so much of it.

Once again, Quinn includes a note about the actual historical figures that her characters were based on, which I found fascinating. So many of her details seemed too wild to be true – it was incredible to read that so many of them were based on factual events and people.

Loved this book, and Quinn has landed herself on my “must read” author list.