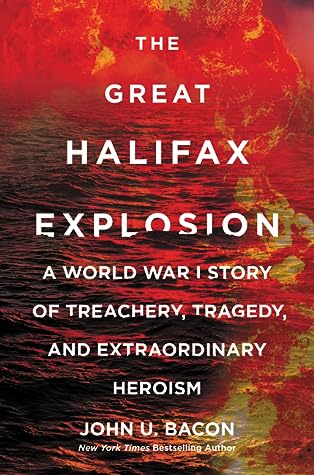 Well, the great thing about having a 65 book backlog is I can almost certainly fill a board. The bad thing is — reviewing 65 books…

This book was really good though so it’s a great place to start! The Halifax explosion took place in 1917 (history!) and truly changed the world — the aftermath of the explosion affected medicine, World War I, nuclear science and the relationship between the United States and Canada. It also took over 2,000 lives, and caused thousands of more injuries. The resulting investigation into the cause of the explosion brought to light how just a few mistakes and bad choices can create such a horror show.

December 1st, 1917: the French ship Mont-Blanc left Brooklyn with 3,000 pounds of explosives, heading to Halifax. The precautions the crew took were INSANE. No matches, special nails, basically don’t breathe on the explosives because they will EXPLODE. Then, they had to avoid all of the German U-Boats in the ocean on the way to Halifax. Finally, they make it “safely” to the harbor — where a ship on its way out full of airplane fuel crashes into the Mont-Blanc and levels the harbor.

2,000 people were killed instantly and 9,000 more injured. The harbor was still full of other ships — many of which carried ammunition or other things really primed to explode. It was horrific. It could have been worse even — Bacon does an amazing job of looking for the heroes. An Intercolonial Railway dispatcher stayed at his post, sending warnings to incoming passenger trains to stop, which ended his life but saved an entire train of civilians. Doctors and relief workers immediately poured into Halifax to help, despite a blizzard that started immediately after the tragedy. So many people had vision problems after the flash that a world-renowed center for the blind was created in Halifax. And poor relationships between Canada and the United States were set aside as the U.S. sent doctors and supplies over the border almost immediately.

The combination of the contents of the two ships basically made a nuclear bomb. They actually measured the explosion of Hiroshima against the Halifax explosion (“the explosive power of the Little Boy bomb was seven times that of the Halifax Explosion”). Bacon goes into great detail about the science behind that. The science stuff was interesting, but I found myself much more invested in the people — both the heroes, and those eventually found guilty of contributing to the circumstances around the disaster. It’s an incredibly well-researched book and the legacy of this explosion lives on.