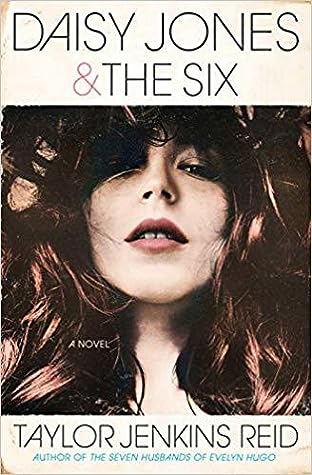 Dustin Rowles mentioned this book on Pajiba (Pajiba!), and that he loved it so much that he immediately sought out Taylor Jenkins Reid’s The Seven Husbands of Evelyn Hugo. I came to it from the opposite direction — I have loved everything else I’ve ever read by Taylor Jenkins Reid and jumped on the waiting list for this one pretty much the moment I heard about it. I was not disappointed. I am a huge fan of oral histories complied into a narrative. I used to read the ones on Vanity Fair all the time and I’ve read some non-fiction books recently that were told in the same way. Seinfeldia, the Friends one, etc. I love the idea of bringing a bunch of voices together to all tell the same story from different perspectives. That’s exactly what Taylor Jenkins Reid does with this account of a fictional band called Daisy Jones and the Six.

Set in the late 1960s and moving forward, Daisy Jones & the Six is the story of a band of musicians united with a wild child singer. The story starts with the origin of each band member, and then explains how Daisy entered the mix. We follow them through years of touring and recording and love and loss. The push/pull between Daisy and Billy goes on for years — they’re basically each other’s addiction. And of course, everyone is drinking and doing drugs and sleeping together. It’s basically a fictionalized version of VH1’s Behind the Music, which my sister and I watched religiously for a significant portion of the 1990s. But what makes this different is, Reid’s characters are all telling the whole truth. There’s no one here holding back to look good in the media. Instead you get the full story, which wouldn’t be possible if it was nonfiction. Also, there’s a lot of really righteous feminism in this book, and I’m always here for that.

If you haven’t read any Taylor Jenkins Reid, I would highly recommend her. Most of the books I’ve read by her have been more romance than anything else (Maybe in Another Life, After I Do), which isn’t normally my jam but they’re so…real. And her last couple of novels, this one and the Evelyn Hugo book, really stand out. She does a fantastic job of creating authentic characters and by the end of each of her books, you feel like you know these people. Honestly, if you had told me that this was a set of real interviews about a real band, I absolutely would have believed it.