> FAQ Home
> Genre: Fiction > Her husband’s secret could destroy multiple families AND This one will be their last anniversary 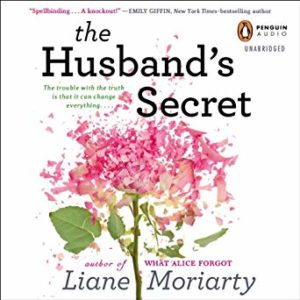 So my sister has been reading and recommending to me Liane Moriarty books for a few years.  I have sooo many books on my TBR list, so it took me a while to get started.  I found this one on my library’s audiobook loan list.  Not only was it an awesome book, it was read by an Australian, so it sounded even more awesome.  I was listening to this book in my car and while I walked my dog at night around the park.  I’m all in now though!

Anyway, there are a few main characters in this book, and the story is told in parts by each of them.  Ms. Moriarty already had me there.  I love multiple storytellers.

The first person we hear from is Cecelia.  She thinks she has a pretty perfect life.  Then she finds a letter from her husband that he wrote when their first daughter was born to be read upon his death.  He’s not dead, so Cecelia puts the letter to the side for a little bit.  She tells her husband about the letter, and he gets super dicey and immediately flies home.  She eventually reads the letter and it shocks her to the core.  The info also affects allll the other main character’s lives in the book.

I really don’t want to give anything away, because it’s an interesting story, and part of the intrigue is figuring out the secret and what has happened since.  I liked nearly all of the characters and felt like they acted mostly like actual people, which is also great in a book!  I got to recommend this one to my sister because she hadn’t read it yet! 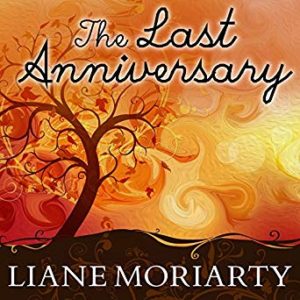 This was my second Liane Moriarty book, and I loved it too.  It wasn’t actually my 3rd book read, but I’m clumping my reviews together because I’ve been suuuuper lax in reviewing.  Hence the dozen or so reviews going up in mid March!

This book was another one I borrowed from the library and listened to it in the car and while walking my pup.

I liked most of the characters from this one, even though a bunch of them were total liars.  They were still likeable.

The one thing I hated from the beginning was the name of the location for these stories.  It was Scribbly Gum Island.  As soon as I heard that I was turned off.  However, it’s not as random as I thought originally.  There are actually gum trees on the island that look like the bark has been scribbled on, and they’re called scribbly gum trees.  Eventually I got over it and just enjoyed the stories.

There’s a breakup, a few deaths, a secret child, some posthumous matchmaking, fairy floss (which is apparently Australian cotton candy), some new loves, some drunkenness, and a lot of other stuff.  I liked this one a lot too!  Surprisingly my sister didn’t read this one either.  I literally found the two out of like 14 Liane Moriarty books that my sister didn’t read!