I decided to step outside my comfort zone and pick up Crazy Rich Asians by Kevin Kwan in anticipation of the incredibly-cast movie coming out this year. (Constance Wu in ALL of the things!) 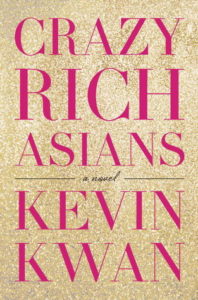 After a brief prologue story to set up just how crazy rich these families are, we get to our main characters: Nick Young and Rachel Chu, enjoying their relatively simple lives in New York City.  Two professors at NYU (history and economics, respectively), they’ve been dating for 2 years when Nick invites Rachel to spend the summer with him in Asia, where he will be best man at his friend’s wedding.  American-born Chinese Rachel broke her “no Asian guys” policy when a colleague set her up with Nick, and she’s nervous to meet the family he’s so secretive about, but she eventually agrees to a summer of exploring Singapore and the surrounding countries.

Once they get to Singapore, Rachel fits in well with Nick’s friends Colin Khoo and Araminta Lee – the couple getting married – and thinks this will be a great trip.  But things start to unravel as Rachel learns from her wealthy college bff Peik Lin that the wedding is in fact THE social event of the season, and therefore Nick must be seriously connected.  By the time Nick brings an unsuspecting Rachel to his grandmother’s “house”, the palatial Tysersall Park, Rachel slowly starts to see that these people are beyond fucking loaded, and most of them think that she’s a gold digging ho who’s not good enough for Nick.

Interspersed with the adventures of Rachel and Nick are chapters focused on some of Nick’s many, MANY relatives: Astrid “The Goddess” Leong – Nick’s cousin, she of the ridiculously fabulous couture collection and insecure, potentially cheating husband; Eleanor Young – Nick’s high-strung mother, who recruits her ultra-rich friends to help her get rid of Rachel; and Edison “Eddie” Cheng – another cousin and whiny man-baby who wants his family to look perfect at all times, and wishes his parents would flaunt their cash more.

This book was daunting at first because there are SO. MANY. names to keep track of, as well as the relationships between the characters.  There is a family tree at the beginning, but I was reading the ebook, so that was a bit of a pain in the ass.  There are also lots of phrases and terms in Malay, Mandarin, Hokkien, and more, throughout the book, and it took awhile for me to get used to referring to the footnotes.  Not to mention all the name-dropping of brands, designers, artists, etc.

Kwan uses his characters to show a lot of interesting dynamics and differences, numerous as they are.  Obviously, there are a bunch of them who don’t get more than a name, but the extended family members are all well fleshed-out and multi-faceted.  Rachel is the perfect avenue into this realm of extravagance; she makes the best of things, even when certain people are absolutely awful to her. She’s overwhelmed by the world she’s been thrust into, but she doesn’t get hysterical or holier-than-thou about it.  Nick is wonderful, albeit totally clueless about the poisonous effects of his family. He grew up in this lifestyle, and was trained since birth to minimize it, so he did a shit job of preparing his girlfriend. But he genuinely loves her, and their relationship is a great center for all the drama.  Peik Lin was my fave, with her vulgar nouveau riche family and her absolute, unflagging support of Rachel.  A close runner-up was gossipy cousin Oliver, quick to accept Rachel and give her the dirt on everyone around them.

Crazy Rich Asians was incredibly immersive, and a fairly quick read once I got into it.  It’s absolutely insane that there are people in the world who actually live like this, but Kwan managed to make them realistic and even somewhat relatable.  I also appreciated the glimpses into various Asian cultures and places, with or without the VVIP lifestyle. Mostly, I am fucking PUMPED for this movie, and the casting looks like perfection.

More thoughts in my full review