> FAQ Home
> Genre: Fantasy > Murder from the perspective of a fetus 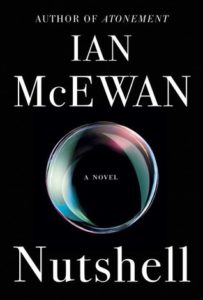 I am a huge fan of Ian McEwan, and I’ve read a number of books by him. So when I saw that he had another one out, I went and picked it up. I’m not sure what to say about Nutshell (2016). It held my attention, but I couldn’t buy into the entire conceit, so I was left with the feeling that it was odd.

The protagonist of this story is a fetus in its mother’s womb (I assumed it was a boy because it sounded like the author’s voice, but we don’t actually find this out). This fetus supposedly knows about the world from overhearing conversations and listening to the podcasts his mother turns on to fall asleep. You just have to accept that this unborn baby understands the world, how it works, and what’s going on to a ridiculous degree.

I’m not sure why McEwan uses the fetus as the storyteller. Is McEwan looking for a quasi-omniscient overseer of the criminal actions of the story? Is it a way to bring guilt and shame to people who do not feel it themselves? Is he a very intelligent stand-in for the reader? A way to play with perceptions? I’m not sure. It was an odd and original choice.

So, the fetus’s mother, Trudy, has betrayed her husband John, and hooked up with John’s brother, Claude. Trudy has kicked John out of his very dilapidated but expensive London townhouse and is now plotting with Claude to do away with him entirely, sell the house, and live happily ever after. Claude is boring and tedious, and it’s hard to understand why Trudy fell for him. John is a romantic poet, bad with money, and hoping for a reconciliation.

I found the plotting of Trudy and Claude and the gradual discovery of the character of John very interesting. They’re all pretty horrible people, and to see them interact was something of a car crash that you couldn’t look away from. That being said, every time I was reminded that I was being told what was happening by a fetus, it took me out of the story. He describes what’s going on in the scene as if he can see it, and then he says he’s imagining his mother’s hair, guessing how Claude looks, and figuring out his mother’s movements by the way he moves inside her. The fetus also goes off on tangents about the world that had to come straight from McEwan’s mouth. There aren’t enough podcasts in the world for a fetus to get this kind of knowledge in nine months of living in a dark, colorless womb–even assuming fetuses have that mental capacity. I’m not going to listen to an unborn fetus tell me how the world should be.

McEwan is a ridiculously talented writer. I cannot even imagine another writer even trying this smart-fetus-as-protagonist thing and making it work. However, I think I’ve preferred some of his other novels more.

You can find all of my reviews on my blog.