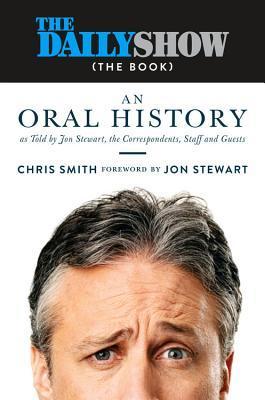 I am a huge fan of oral histories, whether discussions of television shows or movies. And I watched The Daily Show religiously until Jon Stewart took his sabbatical a few years ago. So this book was definitely right up my alley. Thank you whoever reviewed it recently and recommended it to me!

“The outlandish 2000 election and Bush’s victory had come along at the perfect time, helping Stewart, the correspondents, and the writers sharpen The Daily Show’s tone of bemused mockery. The next world-changing events would have just as big an effect—and a late-night, basic cable comedy show would become an unlikely outlet for mourning, an antidote to anxiety, and gradually a center of principled, patriotic dissent.”

This book covers the many years that John Stewart sat at the helm of The Daily Show. I missed the first few years because I was a bit too young to watch it, so I didn’t realize how much he changed the format after Kilborn left. The book talks a lot about politics, both within the show and what the show covers, as well as how Stewart brought about a certain tone and a certain atmosphere for the show. I watched the show everyday in high school with my dad, and for years after I moved out he and I would still catch up with episodes together occasionally. Like I said, I stopped watching when Stewart took his sabbatical and never really went back, but I still have really fond memories of The Daily Show. It was super interesting to me to see how things behind the scenes worked. If you’re a fan of the show and like this sort of thing, you should check it out. It’s pretty well done and the editor did a fantastic job of collecting lots of viewpoints.