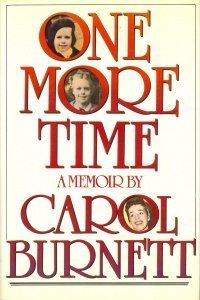 One More Time is Carol Burnett’s story of her childhood and young adulthood, as told to her children. Because it’s Carol Burnett, it’s told in a humorous manner with an upbeat, optimistic tone. But it’s really a very sad story.

Burnett spent most of her childhood with her grandmother, Nanny, who spent most of her time talking about her death. Burnett’s mother abandoned her at an early age to pursue stardom in Hollywood; her father was an alcoholic who appeared at random times. After a few years, Nanny and Carol moved into Carol’s mother apartment, infuriating her because she didn’t want a kid around. Throughout all of this, Carol made up stories and danced and made people laugh in an effort to fit in and hide her family situation. Her relationship with her Nanny remained strong (she’s the one Carol sent the secret “goodnight” to, not Carol’s mother), despite the fact that Nanny rarely left the apartment, or even her bed.

I’ve always been a big fan of Carol Burnett, but I was really impressed by her writing skills in this book. She walks a thin line between comedy and tragedy throughout, and walks it well.