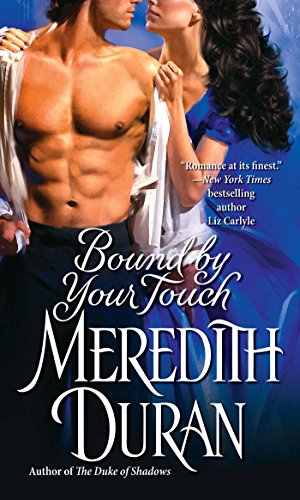 If you’re looking for a romance with a lot of emotional impact, this is the book for you.   There’s some side shenanigans with international intrigue, but the heart of this story is two people learning about themselves and learning to love each other.

This is a book that I’ve intended to read for years. I’m not sure what took me so long to get to it, but it’s finally (*finally*) off the TBR pile .  (I double checked, and I bought this book in February 2015.  I think I’m going to start including stats like that in my reviews just to help me stop buying books because it’s taking me too long to get around to reading them).  I’ve read a couple other Duran books, and they were very good, so I had high hopes for this one – and was not disappointed.  Yay!  (Side note: this is not a BDSM book, which I was slightly worried about considering the title).

Lydia Boyce is a 26 year old spinster who spends her time managing her father’s business.  Her father is an archeologist who spends all of his time in Egypt.  Lydia handles the import of artifacts for him as well as other fundraising to keep his digs and dreams going.  James, Viscount Sandbourne, spends all of his time living a debauched life, and basically doing anything that he thinks will upset his father.  Yes, James is nearly 30 and spends all of his time behaving like a child.  There is a heartbreaking back-story about James’ sister that has led him to treat his father this way.  James has bought an Egyptian artifact and Lydia identifies it as a fake.  They quickly get caught up in investigating international artifact smuggling and therefore get to spend lots of time together.  Lydia is very serious and has no sense of humor about her role in the world.  She was disappointed in love and has given up hope of finding it.  She finds validation through running her father’s business.  James appears to take nothing seriously, and drifts aimlessly through the world.  They poke at each other and discover the gooey insides of their opponent.

If you’ve spent any time reading romance you know that the beautiful man/plain woman trope is a THING.  It is a THING that I am sick of.  But, this book handled it so beautifully that I’m even more annoyed with the usual way it is dealt with.  This is a story of two people who live very different type of lives with very different personalities, but who are drawn to each other.  Some of it is physical, but most of it is personality and just how they interact.  And while they are both uncomfortable being attracted to each other, there is none of the ‘I’ll just sleep with this person to get it out of my system and move on’ nonsense that so often appears.  There is no physical consummation until both parties have acknowledged the extent of their feelings (even if they are still struggling with them) and there is so much *more* to what they feel than an unwitting physical attraction.  It was glorious.

There are some really complicated emotions addressed in this book.  Having difficult relationships with family members seems to be a given in this genre.  But Duran took it all a step further and really mined the protagonists’ emotions down to an uncomfortable place, and I appreciated that so much.  The hero and heroine openly talk about faith and what it means to have faith in and love someone.  The opposition of unconditional love/trust vs. love earned was so well done.  I found the absolute best part to be the relationship between James and his sister, Stella.  Just completely fascinating and sad, and also somehow hopeful.

I highly recommend this book.  The only thing keeping me from raving about it was the lack of banter.  The type of banter I like was not the main characters’ style, so it wouldn’t have worked, so this is a failing only for me personally, and not at all of the author/book.  I will definitely be reading more by this author.