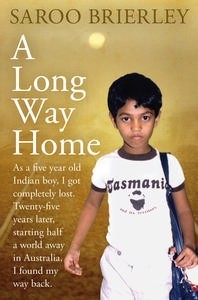 Oh, this book was so hard to read — both the specific tragedy of Saroo’s story, as well as the horror of what millions of other kids like him continue to experience. It’s an excellent book, and definitely worth reading, but I will not be seeing the movie version.

“My mother described her reactions better than I ever could mine: she said she was “surprised with thunder” that her boy had come back, and that the happiness in her heart was “as deep as the sea”.”

Saroo lived in terrible poverty in India until he was five. He talks about his earliest memories, which include spending days alone with his baby sister while his mother and older brothers left in search of food and work. He used to have to keep his sister from eating charcoal, they were so hungry. Then one day, he followed his brother to the train station, accidentally got on a train, and was swept away. After weeks on his own in Kolkata, he ended up in an orphanage and eventually an Australian couple adopted him.

Restricted by his lack of language and his brief memories of that time, he spent years wondering where he really came from and what happened to his family. He had two clues: two mis-remembered words that might have been the name of a street, a neighborhood, or a town. As an adult, he spent months searching Google maps for images that might match up to his memory. He eventually found his hometown after almost a year of searching, and made that trip home.

Saroo has a mostly happy outlook on life — he grew up with good people, and now has a relationship with both of his families. But his story is a sad one, and one that’s repeated daily — the poverty, the missing children, the hunger. Reading about all the other kids who didn’t find a home — any home — or starved alongside their families just broke my heart.