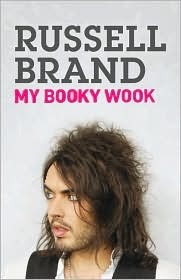 One of the reviews of this book (which I picked up, along with its sequel, for $2 at Half Price Books) on Goodreads says, “i have said it before and i will say it again: junkies are boring.” And blunt as that may be…it’s not totally inaccurate. I’ve read good books written by recovering addicts (Kristen Johnson’s Guts springs immediately to mind), but read enough and they begin to blur together.

“What I’ve learnt – to my cost – on several occasions in my life, is that people will put up with all manner of bad behaviour so long as you’re giving them what they want. They’ll laugh and get into it and enjoy the anecdotes and the craziness and the mayhem as long as you’re going your job well, but the minute you’re not, you’re fucked. They’ll wipe their hands of you without a second glance.”

Brand’s writing sounds just like him talking — which, admittedly, I’m familiar with 90% due to Forgetting Sarah Marshall, and the rest from Get Him to the Greek. It’s very campy and self-deprecating, and you can just tell that he thinks he’s very witty but doesn’t want you to think that he thinks that. And he pretty much states that in the book. This memoir covers his (horrible — seriously) childhood, shuttled around between a wildly overindulgent mother, and a philandering father who left porn around the house for his young son to find. Between his upbringing and his genetics, it’s really no surprise that he spends about two decades drinking, doing hard drugs and having sex with everything that moves before finally getting sober. He wrote My Booky Wook after going through rehab for several addictions (he’s in treatment for sex addiction as the book opens). But like many other celebrities who’ve written about getting clean, he seems to focus more on the wild and crazy things he did while wasted than his life post-addiction.

I have the sequel to this on my bookshelf, and plan to read it even though I wasn’t too impressed with this one. I liked his writing style, and some of his stories really were funny. I’m hoping the follow up will have a bit more to say.