After my recent Alex Cross-athon, I felt I needed a palate cleanser. And what better, than to re-read some old favorites, by the grande dame of mystery herself, Agatha Christie? I first discovered Christie when I was about 10 or 11, prowling through my mother’s bookcases for something to read. I guess I had exhausted whatever I had taken home from the Bookmobile – probably Louisa May Alcott’s Eight Cousins or a collection of folktales. The first Christie I read was The Moving Finger. I still have my mom’s paperback, with its lurid purple cover illustration. 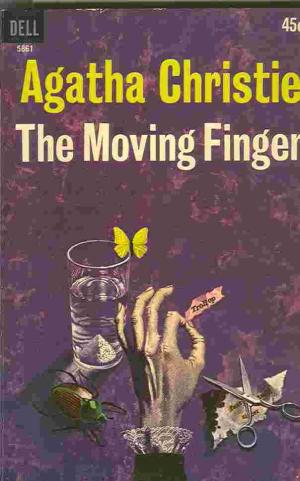 I almost chose that book to read, but decided that what I really needed, the perfect antidote to the oh-so-imperfect character of Alex Cross, was the detective par excellence, the little Belgian, Hercule Poirot. Although Christie reportedly grew to loathe her most famous creation, I loved Poirot at first read. From his sartorial elegance, his love of symmetry and order, and his amazing “little grey cells,” Poirot had me enthralled. Christie’s books, if you read between the lines, are full of sex and greed and, well, evil. Poirot, as much as he lives his life with precision and fine food and wine and aperitifs, is never blind to such base human emotions and desires. He travels in fancy circles, but he is always able to treat everyone, no matter what their station in life, equally – especially when it comes to considering them as a suspect in a murder.
Agatha Christie’s novels are a time capsule. There are aspects that stand out as strange and inappropriate today – the discussions of class, the role of women in society, Christie’s own personal prejudices – she really doesn’t seem to like Italians. But she also gives us a glimpse into the mores and habits of a time gone by. And there is a lot to be enjoyed: a time when people dressed for dinner and travel, writing letters, having few but essential, possessions. One can learn some great forgotten or little-used words while reading Christie: baize, malachite, galoshes, jackanapes, valise. It’s also fun to read such English phrases as “trunk call,” “games mistress,” and “dressing gown.”
Poirot and his little grey cells were on fine display in these four books I have read recently: 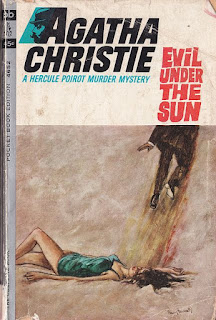 Evil Under the Sun, 1941 – Poirot wants a relaxing holiday on England’s Devon coast, but soon observes that some of his fellow hotel guests are involved in a love triangle that could prove dangerous for one of the participants – namely a flirtatious and callous beauty named Arlena Marshall. 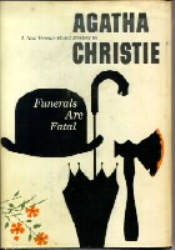 Funerals are Fatal, 1953 – Richard Abernethie, a wealthy man, has died, and his family has gathered for his funeral. At the reading of his will his eccentric sister Cora blurts out, “But he was murdered, wasn’t he?” When Cora turns up dead soon after, Hercule Poirot must investigate whether her murder was a cause and effect. Christie could be quite brutal in her books, as Cora is killed with the multiple strikes of an axe, a la the parents of Lizzie Borden. One of my favorite Poirots, the group of suspects, Richard and Cora’s relatives, are some of the most entertaining and well-drawn in Christies’ mysteries. 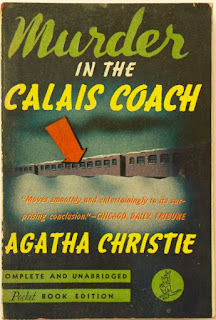 Murder in the Calais Coach (Murder on the Orient Express), 1934 – One of Christie’s most famous and ingenious puzzles, this book finds Poirot on the famed and luxurious Orient Express. The train and its elegance is described beautifully, but the reader can’t get lost in the details of the train, as almost as soon as it leaves the station a murder takes place in the middle of the night, in the compartment next-door to Poirot (!), while the train is trapped, caught in a blizzard. The ultimate “locked room mystery,” the book is great to read for a first time, or re-read and see how Christie plants all the clues to her creative solution. 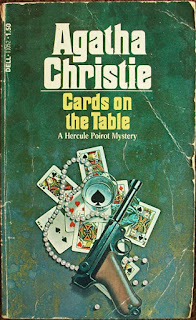 Cards on the Table, 1936 – In this clever book Christie pits four sleuths vs. four presumed murderers. The mysterious Mr Shaitana sets up a strange (and of course dangerous) dinner party. He invites Poirot, his friend Colonel Race, and mystery author (and Christie stand-in) Ariadne Oliver to join him on Team Sleuth. The other four guests are Dr Roberts, Mrs Lorrimer, explorer Major Despard, and a young woman named Anne Meredith. During dinner Shaitana talks about murder and its various methods. After the meal they divide into two groups to play bridge. At the end of the night Poirot and Race discover that Shaitana is dead – stabbed with his own ornamental knife. The book uses the game of bridge as a clue to each suspect’s personality, and the detectives split up, along with Superintendent Battle, and each focus on one suspect to determine if they were, as Shaitana suspected, “successful murderers,” in their past.

Christie always plays fair with her readers, which becomes quite clear on a re-read. I have quite enjoyed this mini Christie vacation and feel that I can go ahead and read some other books on my to-read list – or maybe squeeze in a few more Poirots before the holidays.

You can read more of my reviews on my blog, xoxoxo e