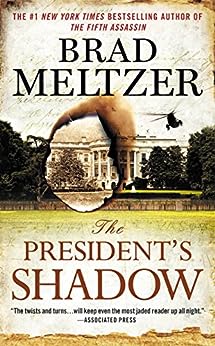 This review is for the audiobook version of The President’s Shadow by Brad Meltzer, read by Scott Brick. This is the third book in his Culper Ring series (I originally wrote fifth, it seems like it’s been going on forever!), and I don’t know why he hasn’t moved on to some new characters. The series is about a secret society tasked with the protection of the Presidency of the United States, and specifically about an archivist at the National Archive that is brought into the Ring and ends up becoming its leader. There is also a crazy former soldier that talks to a dead First Lady and thinks his mission on earth is to be the Fifth Assassin, and kill the President. Somehow the crazy man gets arrested and escapes multiple times I hope the fourth book has a different antagonist. The idea of the secret society is interesting, and Beecher White is an interesting character, but the crazy man has got to go. This installment has Beecher looking for the truth about how his father died, while also trying to keep the crazy man from the President.

As always, Scott Brick does a great job with the reading, keeping a good pace and distinguishing between characters in an easy to follow way. I wouldn’t recommend this if you’re looking for something fantastic, but it’s also not the worst book I’ve ever read. It was great for a sleepy day home sick in bed, which was all I really needed.