> FAQ Home
> Genre: Biography/Memoir > A wonderful follow up to That Awful Book 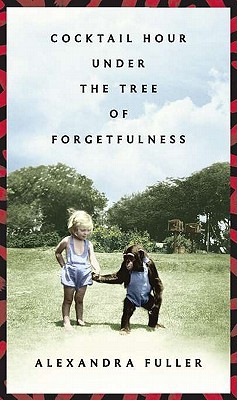 Apparently Alexandra Fuller’s first memoir, Don’t Let’s Go to the Dogs Tonight, caused a bit of strife between her and her mother (who refers to herself as Nicola Fuller of Central Africa, and to Don’t Let’s Go to the Dogs Tonight as “that Awful Book”, which cracked me up on multiple occasions). Not surprising, since Nicola does not come off as the greatest mother in that book. A lot of fun, perhaps, but not the nurturing type. In Cocktail Hour Under the Tree of Forgetfulness, Alexandra delves a bit more into her parents’ past, and attempts to fill in some holes in her own memories of her childhood. Nicola may not come off too great in this one either, but it’s a little easier to understand why.

“You learn not to mourn every little thing out here, or you’d never, ever stop grieving.”

Alexandra’s parents, Tim and Nicola, both came to Africa on different paths. But both knew immediately that this was the only place for them. After decades, with multiple farms and homesteads lost, severed connections with family back home, the deaths of three children and countless pets — they still know Africa to be their home, and claim not to regret a moment. Alexandra uses this memoir to find out more about her parents, and therefore, her own history. Having just read Don’t Let’s Go to the Dogs Tonight, I could see where a story from the first book was fully fleshed out and explored in this one. We get more information about the deaths of the Fullers other three children, as well as how they ended up at various homes across the continent. We also find out more about Nicola’s background and family, which goes far in explaining her actions throughout Alexandra’s childhood. I highly recommend reading these two in order.