> FAQ Home
> Genre: Fiction > Well, I did like the elephant, at least 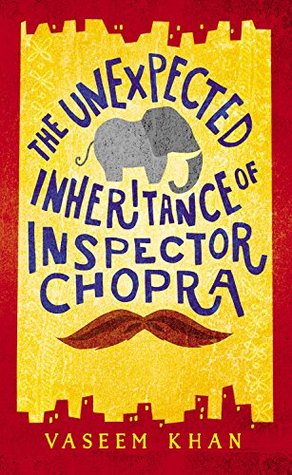 I had high hopes for this one — an interesting premise, and a different kind of setting than I’m used to (Mumbai). But between the characters that were more like caricatures, and the fact that you feel like you’re somehow missing some background (I checked more than once to make sure that the book was the first in the series, because it really feels like a story came before it), I ended up pretty disappointed.

“On the day he was due to retire, Inspector Ashwin Chopra discovered that he had inherited an elephant.”

Well, what other plot summary could you need? That basically sums it up. Okay, so Chopra has to retire fairly young due to health issues. On his last day, a case comes to him — a drowning of a young man that has been declared an accident, although the young man’s mother insists he was murdered. Chopra blows her off, satisfied to leave it to his successor, but eventually becomes determined to figure out if it really was a murder. And his uncle dies, leaving him a very sad baby elephant.

An interesting premise, but between the horrible writing of the characters and some of the laughably bad plot points, it comes together pretty badly. The bad guy not only monologues (twice!), but practically cackles in the process. One of the pieces of evidence is literally a list of names and the amounts of money each will be bribed. Chopra’s mother-in-law is a total shrew (and not even in a funny way), and his wife spends the whole time obsessed with babies and her desire to give Chopra a son (there’s this whole other plotline where she’s going to adopt the baby of a a friend’s unwed daughter that seems really extraneous — a plotline that resolves happily when the girl’s parents force her to marry the boyfriend). Chopra is a total Hollywood cliche — he even has someone threaten to take his badge at one point — focused on hunting down the killer on his own.

The thing is, the book’s actually pretty short (300 pages or so). If the author had added a hundred pages of background for these characters, or just assigned them motivation, then he could have added depth without bloating the overall book. And it’s not like he can’t write — the way he describes Mumbai practically leaps off the page. He just doesn’t seem to know what to do with the people in it.