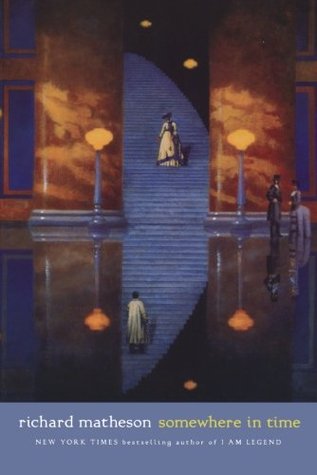 I’ve really liked most of what I’ve read by Richard Matheson (Hell House, I Am Legend, Stir of Echoes, etc) but two of his books have fallen pretty flat for me, and they’re both romances: What Dreams May Come, and now, Somewhere in Time. I wouldn’t call either book bad; they’re just not as good as I’d hoped, based of his others.

“I looked at all the people, feeling sorry for them. They were still subordinate to clock and calendar. Absolved of that, I stood becalmed.”

36 year old Richard Collier has been given only a few months to live, and he decides to spend them on the road. He ends up in a hotel in California, drawn inexorably towards a photograph of an actress named Elise McKenna. He falls completely head over heels with this woman based off her photograph, only to discover that she was famous in the 1890s and has since passed away. He researches her, finds out interesting things about her history and some changes that occurred to her sometime in the late 1890s. Somehow, he becomes convinced that through sheer willpower, he has the ability to travel back in time to meet her.

The main weakness of Somewhere in Time, sadly, is the romance. I rarely go for “love at first sight” kind of plotlines, especially based off something so flimsy as a photograph. The time travel stuff is pretty nifty, though, and worth the read just for how Collier/Matheson goes about it. But I just couldn’t buy the attraction that led to it.