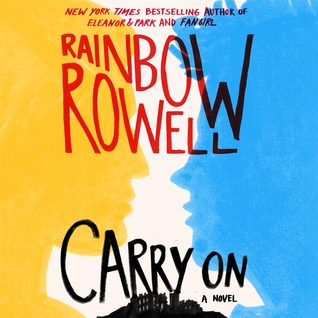 I was a little nervous when I first started this one. Y’all were posting a review a day, gushing over it, but it took me a while to get into it. I think my problem was I was listening to it as audiobook while running, so I only got about an hour a day. And it starts a little slow. And whiny (Simon). But once Baz shows up — the whole thing takes off and I fell just as much in love as y’all did. The audio version does feature some great accents, though.

“You were the sun, and I was crashing into you. I’d wake up every morning and think, ‘This will end in flames.”

So you all know by now what this book is about: Simon Snow, incredibly powerful magician boy, fighting the evil Insidious Humdrum as it sucks the magic out of the world. It starts out with a lot of parallels to Harry Potter — or at least, I had trouble not going, “Ok, so she’s like Hermione…that one’s like Hagrid”, etc. But once I got past that, and the story began to really do its own thing, you see that Carry On is a lot more than Harry Potter fanfic (specifically, slash AU where Draco’s a vampire) — not that I’m knocking that. Rowell’s created an incredible group of characters — damn, did I love Penny — and I wish she’d write the six books that ought to have proceeded this one, as well.