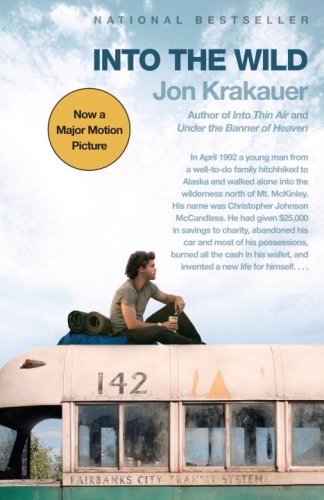 I would normally do a happy dance for a triple cannonball (which was my goal for the whole year, so I’m pretty amazed that I hit it in August!), but my 156th book, Jon Krakauer’s Into the Wild, hardly lends itself for happy dancing. While the book contained some pretty depressing material, Krakauer also filled it with beautiful scenery, touching interviews and his own little glimpse into the life of a difficult, passionate young man.

“I’d like to repeat the advice that I gave you before, in that I think you really should make a radical change in your lifestyle and begin to boldly do things which you may previously never have thought of doing, or been too hesitant to attempt.”

So writes Christoper “Alex Supertramp” McCandless, in one of the many letters he wrote to people he met over his journey across the states. He touched quite a few lives, many of whom spoke to Krakauer years later for his biography of McCandless. People who picked him up hitchhiking, folks who gave him work or a meal or a place to stay. They all remember him fondly — he was a smart kid, a friendly kid, an interesting kid. He stayed in contact with some of these people — some of whom didn’t even know his real name — by sending letters and postcards from his many different stops. During that time, however, McCandless pretty much entirely severed contact with his parents and sister, demonstrating the main contradiction about this boy (as expressed by his grieving father): How is it that a kid with so much compassion could cause his parents so much pain?

McCandless grew up with workaholic parents who provided him with everything he could possibly need. He fought against them constantly, rejecting their money and their rules and their advice. Demonstrating a wanderlust from an early age, he saved up his own money to buy a car as a teenager, and spent most summers and other breaks driving across the country. Then in 1991, after graduating college, he gave away all of his savings (an impressive $25,000), and set off again. This time, he didn’t come back. In April 1991 he abandoned his car and walked into the Alaskan wilderness. 4 months later, hikers discovered his emaciated body in a van that he had been using for shelter. Most people believe he starved to death, although Krakauer posits some alternate theories in the book.

A lot of people glorify McCandless — he stepped outside of civilization to live among nature, or he died for his beliefs in the natural world. Other claim he must have been crazy, or stupid, or suicidal. Krakauer does a good job of exploring McCandless as an individual, not a hero or an icon or a moron with a death wish, and comes up with a passionate, extremely intelligent young man who simply did not believe in his own mortality. Krakauer has a long-held passion for mountain climbing, and he spends a little time explaining to the audience that he could have easily died several times himself from the simple combination of the dangers of the wild, and his own self-confidence. Instead, a little luck guided him back out of the wilderness time and time again. With a little luck, McCandless might easily have lived as well. Or he could have died sooner — he almost drowns in Mexico a few months prior to his Alaskan trip. Krakauer also cites other examples, dating back decades, of similar situations — under-prepared people who got in over their heads, and paid the ultimate price. He wrote Into the Wild in 1996 — I wonder what his thoughts on Cheryl Strayed’s Wild might have been? I certainly kept thinking about her while reading this story.

All in all, I would call Into the Wild one of the best books I read this year. I already knew I liked Krakauer’s way of telling a story (I read Into Thin Air earlier this year and similarly enjoyed it), but I came away most impressed by his research. He interviewed dozens of people, extracted entries from the diaries and margin notes from the books that McCandless left behind. And he does an excellent job of providing context for the actions that McCandless takes over a series of years. Truly, an excellent book.