> FAQ Home
> Genre: Non-Fiction > I’m Glad I Wasn’t the Lady of the House in the Victorian Era

An almost forgotten classic though a founding text of Victorian middle-class identity, Mrs. Beeton’s Book of Household Management is a volume of insight and common sense. Written by what one might now describe as a Victorian Martha Stewart, the book offers advice on fashion, child-care, animal husbandry, poisons, and the management of servants. To the modern reader expecting stuffy verbosity or heavy moralizing, Beeton’s book is a revelation: it explores the foods of Europe and beyond, suggesting new food stuffs and techniques, mixing domestic advice with discussions of science, religion, class, industrialism and gender roles. Alternately frugal and fashionable, anxious and self confident, the book highlights the concerns of the growing Victorian middle-class at a key moment in its history. This abridged edition serves as a cookery book, while documenting a significant aspect of Victorian social and cultural history. 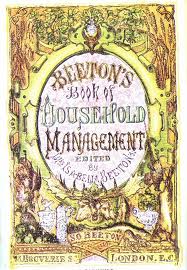 Where to start with Mrs. Beeton, where to start. Mrs. Beeton’s Book of Household Management is the same sort of book as Mrs. Seely’s Cook Book which I reviewed previously for the CBR. It’s a book which in seeking to indoctrinate the new middle class with the methods of a high-born life also serves as a window for those of us looking back. Unfortunately for me, I enjoyed Mrs. Seely’s Cook Book quite a bit more.

Originally published in 1861, this book predates my era of research (1880-1920) but it shows the basis for the expected social order of the High Victorian Era. It is an easy read, once you settle into it, although it is very, very long. Each section is short though, and provides an easy way to work your way through. I was able to read the portions which were of interest to me in a few days. (Again, I skipped entirely over the recipe sections).  But what I felt was lacking was a sense of joie d’vivre that Mrs. Seely’s book encapsulated where Mrs. Beeton’s feels like a chore list. Which is why I’m glad once again to know that I wouldn’t have been the lady of the manor, but instead a maid or cook in her house.

So, if you’re wondering about the time period and how a house was or should have been, then give it a read.