I have really turned around on this series! I feel like I need to re-read the first book now before moving onto the series proper, because I only experienced it in a grudging manner, and didn’t appreciate it for its good qualities. I will also be honest in that it was entirely the Netflix show that did the turning. I enjoyed it so much that it crystallized for me retroactively what people were seeing in the books. This second book in the Witcher series is […] 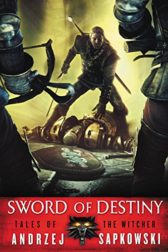 This second Witcher volume, like the first, is a collection of short stories not necessarily told in chronological order. Sapkowski further develops the main character Geralt of Rivia while hitting hard on themes of a changing world and the role of fate and destiny in Geralt’s life. Some of the stories were featured in the TV series, and the reader gets to know characters like Dandelion (Jaskier) and Yennefer a little better. Sword of Destiny includes six stories, the first of which will be familiar […]