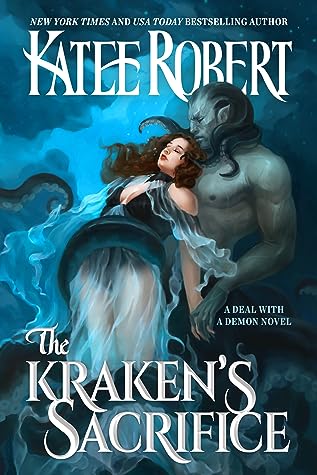 Catalina signs seven years of her life away without much thought – she’s considered a failure in her world anyway, and at least the money she will get in return will ease her way. What she doesn’t expect is to be drawn to Thane, the leader of the krakens.

I’ve been reading Katee Robert’s new releases pretty religiously for the last year or so. At this point you have to expect, statistically speaking, that you won’t like every one, but I was still pretty disappointed to encounter my first dud. What went wrong? Let me count the ways…

At the core of the issue is that fact that I think the main characters are simply not compatible. Robert described this book as ‘grumpy/sunshine.’ I will concede that Thane is indeed grumpy, but Catalina is very definitely not sunshine. Instead, she’s become so used to emotional abuse that she hardly bats an eye at being more or less put in solitary confinement for weeks by the supposed hero of the piece.

So Thane messes up. That a hero’s purview in many romance books. But it’s certainly not what I expect from a KR book, especially considering how he barely grovels, and how easily Catalina forgives him for all the ways he’s endangered her. They don’t spend much time on page bonding or trying to understand each other, and I’m certainly not convinced that Catalina has particularly started to overcome her traumatic past. I don’t feel that their happy ending was earned.

Funnily enough, I think the author’s skill in creating distinct characters worked her against her. Because Catalina feels like such a real person, the way she is treated is doubly frustrating her. Is that a plus or a minus here? I also appreciated the discussion around consent and bodily autonomy in the second half of the book, even though I didn’t really like the reason it came up.

At least the cover is pretty?

Anyhow, I am very sorry that this had to be the first review of the year. Do not recommend.