Getting back on my reviews with Cannonball Read 14 Bingo! I liked all three of the remaining stories from the Black Stars anthology. I highly recommend you check them out on audiobook.

“These Alien Skies” was my favorite story from this round. Two human space explorers are sent through a wormhole on a mission to find habitable worlds. Before we can really get to know Msizi and Tariro, an accidental explosion (or was it) sends their ship crash landing on a planet designated Malcolm X-b. They think they’ll die but discover it’s flourishing with a Black human-like population. And they aren’t too happy about space colonizers. They are rescued but the government doesn’t want them to stick around. I don’t want to spoil the twist, but Tariro goes through an emotional journey of letting go that leads to a wonderful discovery.

It gave me vibes for some reason of Denis Villeneuve’s Arrival. It’s something about spaceships being a part of the story, but really it’s a story about grief. It was quite brief, but I did enjoy the exploration of colonization and immigration. The plot hints at the present day. It mirrors how there are factions of those who want to welcome immigrants and others who want them to leave. Humans want to see the stars, but what if there was someone already there when you “discover” a new land? It also delves into the power of memory and prophecy. I would have loved a sequel to this story. I definitely plan to read more by C.T. Rwizi.

“2043 A Merman I Should Turn to Be” by Nisi Shawl follows two Black artists who accept reparations and settle as Black “mer” in an underwater plot of land near South Carolina. Darden and Catherina think they know the risks, but it’s not until they undergo the cybernetic transformation into mer-people does it really hit home. They are promised a guide and safe passage to their plot of land. But of course, things don’t go as planned. All they want to do is perform a show and start their lives over away from hate groups. Unfortunately, they are attacked as they attempt to perform. The story sort of just ends and it’s unclear what the fate of our characters is.

I think the story was a call back to how Black towns were created for Black people to live separately.  As with most of our history, mere existence is enough for these havens to be attacked like the Tulsa massacre. This was my least favorite of the stories, mainly due to having to re-read the last act to understand the action. The concept of Black people voluntarily going under body modification in the hope of a fresh start is quite interesting though. I’m not sure I would have been brave enough to undergo it. I wish we had more explanation or context for the musical goals of the group. The story felt like it started in the middle and the reader was forced to keep up. As it’s short, I didn’t mind going along for the ride. 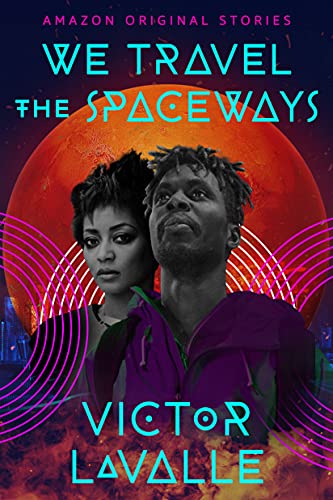 Victor LaValle’s “We Travel the Spaceways” was narrated by the brilliant Brian Tyree Henry. He truly captured the main character, Grimace, and his confusion over what was in his head (hence the mind square) and what was a fantastic reality. Grimace is homeless, but on a special mission to save Black people from this world. He has a prized collection of soda cans that speak to him and relay messages from gods from above. Or he might be unwell, but in case it’s true, he follows through on these tasks. He is told to throw Molotov cocktails to help with their space interference. As you’re reading, you might wonder if he wants to hurt people, but he makes sure the buildings are clear. One night he meets the love of his life, Kim. She is transgendered and living rough as well, but a lot better than Grimace. Together they figure out whether Grimace is delusional or not.

This story had a mix of romance, comedy, and speculative fiction. The characters were so vivid even though we don’t spend that many pages with them. I could identify with Grimace right away even as I was worried for his sanity. This is a testament to LaValle’s writing style. The homeless man that sees what others can’t reminds me of N.K. Jemisin’s The City We Became. I like the overlooked hero who is sensitive but also unpredictable. If you enjoyed that book, this story is very much up your alley.

Overall, the Black Stars collection is a must-read for anyone into afro-futurism, speculative fiction, and excellent audiobook narrators. If you have kindle unlimited and audible, you get both the e-book and audio versions as part of your subscriptions!