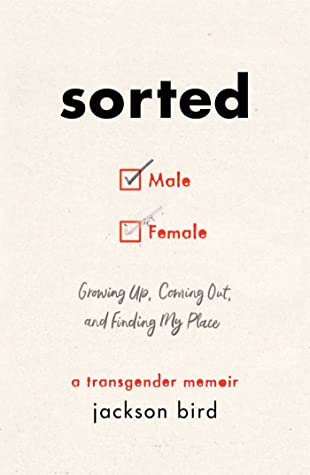 Before we get to the millionaire-author-sized elephant in the room, this is a pretty basic memoir about Jackson’s life from birth to his late twenties, with a specific focus on his struggles with gender and sexuality before finally coming out as a trans man at age 25.

This was an extremely solid book, told with clear uncomplicated prose, and an impressive sense of self-reflection. As a cis person, I can’t speak for the material, but I have read quite a few books by trans people about their experiences at this point, and a lot of it did feel very familiar. This is mostly likely because Jackson isn’t writing to other trans people as his primary audience, but to cis people. He wants to educate and humanize trans people by putting his story out there, but also because he says how important it would have been to have a book like this when he was growing up. His story is emotionally affecting and he tells it well, so even if you are disappointed by the book not being a revolutionary piece of work, there’s still a nice story here.

And now, for the unfortunately and ironic title of the book. Jackson was a big name in Harry Potter fandom, and he worked for the Harry Potter Alliance (a non-profit) for years. The book is structured around the idea that gender in the real world can be compared for educative purposes to the Hogwarts Houses. The quote that opens the book is from Dumbledore, saying, “I sometimes think we Sort too soon.” This metaphor works well. Unfortunately in 2022, knowing that the person responsible for creating Jackson’s beloved story (and mine) is transphobic and openly dismissive of Jackson’s gender and experiences gives the whole thing a bitter edge it didn’t have when it was initially published in 2019.

Still, this is worth reading, and the audiobook was a good choice, as it’s read by the author, and he does a really good job.

(Also, it made me laugh to find out that Jimmy Carter regularly flies commercially and that when he does so, he shakes the hand of every person on the plane, hence the title of my review.)

Read Harder Challenge 2022: Read a memoir by someone who is trans or nonbinary.