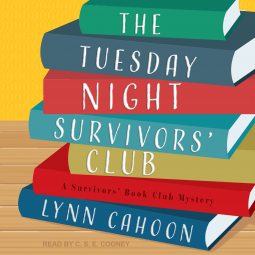 After surviving cancer, Rarity Cole moves to Sedona, Arizona, opening a bookstore and starting a book club for fellow cancer survivors. When a new member, Martha, disappears, Rarity, her best friend Sam, and the other book club members start investigating the case.

I’m not one much for cozy mysteries, as in a way I can find them oppressive when they part too much from reality. But I was drawn to The Tuesday Night Survivors’ Club because of the unusual focus – a group of cancer survivors – especially when I found out the author was writing from experience in this regard.

I really liked all the characters, especially Rarity, Sam, and Drew, but more minor ones are also well-sketched, and they were ones I’d be glad to see more of in future books. The author keeps a good mix of coziness and authenticity going throughout the story, and I enjoyed the way she balanced more serious topics with humor. The mystery was also intriguing.

However, there were aspects about the book that I did not understand or enjoy at times. For example, what prompts the club to get so invested in Martha’s death, considering they’d only met her once? I was also a little dubious of the various romances going on. We don’t get to know Archer, Rarity’s love interest, very well, as he pops up in the story only a few times. Meanwhile, we see the policeman Drew much more often, but though I liked him I did not really buy the romance between him and Sam. Still, what I would like even less is if Drew and Rarity end up together!

I read this book as an audiobook, and I thought the narrator C.S.E. Cooney did a good job with it. She had a good variation in her voices, so that I could tell the plethora of characters apart easily, especially all the women. As (I think at least!) is necessary for a cozy mystery, she read in a soothing manner.

Overall, a nice cozy mystery, workmanlike in its qualities.