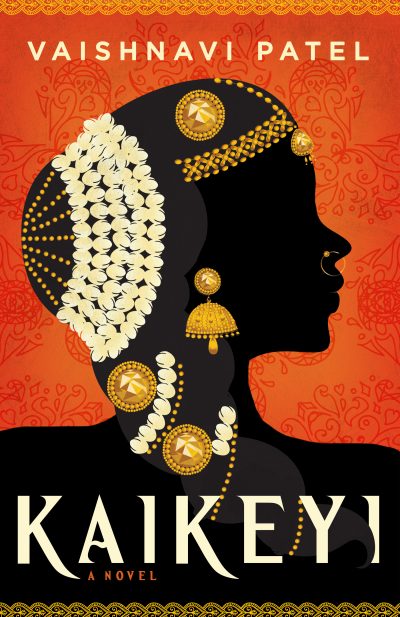 While I do think this book was major struggle city to get through for numerous plot-related issues, I’d like to give my standard disclaimer around books featuring South Asian protagonists or based on South Asian mythology: I am, unfortunately, a harder grader than I might be for stories based on other cultures.

I don’t know what it is! I think it’s because I know these epic tales very well, and I can see the plot points that have always made me go ughhhmehhhhehhhhewww, and I can sort of vaguely see the book that could be written that would take the plot bones and construct something new, modern, and engaging. So a book is always trying to compare to what’s in my head, even though what’s in my head is a bit vague–aka it might be an impossible standard to beat. Then again, there are many books that I read which I really enjoy because I feel like characters always do the thing that I think they should.

So that aside, this book. Kaikeyi tells the story of the third and youngest wife of King Dasaratha, king of Ayodha, and father of Lord Rama, one of the avatars (human incarnations) of Lord Vishnu, the divine embodiment of preservation (one of the trinity, with the other two being destruction and creation). As the stories go, avatars are born every so often to rid the world of specific evils (one is due at some point in our current age, which is a disaster zone clearly so uh not sure what they’d be here to destroy). Rama was born to slay the King Ravana, of modern day Sri Lanka, who had through many years of penance and prayer amassed a horde of gifts from the gods making him essentially unbeatable.

I’m named after one of the main characters in this epic–Sita, Lord Rama’s wife, who is kidnapped by Ravana (thereby setting into motion the war that will fulfil Rama’s prophecy) during the time period when Rama is exiled to the forest after devious machinations by Kaikeyi. This is the context into which this book lands–why does Kaikeyi do what she does? Who was she? She, with everyone else, loved Rama (who is held up as an example of the perfect man) so why did she eventually force Dasaratha to send Rama away?

There are parts of this book that are very interesting. Kaikeyi, who never receives an answer to her prayers (not an entirely foreign concept, gods frequently listen and grant prayers in ancient Hindu texts), gains access to a magic of sorts that lets her visually see “bonds” between her and people she knows, and manipulate them as well. Her utilization of this bond magic to carve out a space for herself in a very sexist monarchy system is one of the better done plot lines.

But otherwise, there’s just…a lot going on here, and it doesn’t really tie together all that well. There’s a whole bit with Kaikeyi and her family, and how they devalue her abilities because she’s a woman. There’s a storyline about Kaikeyi’s relationship with Dasaratha, which is mildly triggering as Kaikeyi is clearly written as asexual (or, at a minimum, not straight) and therefore uninterested in getting it on with him, but it eventually turns into one where Dasaratha is happy to have her on his council of advisors etc, and then she has to deal with sexism there. There’s her relationship with the other wives, which is antagonistic for reasonable reasons but adds too much complexity to an already complex story.

And then there’s the entire plot that attempts to explain why Kaikeyi does what she does, and that’s where everything sort of falls apart for me. Either have her be utterly devious or have her be tragically misunderstood. Performing characterization lobotomies for the sake of making her…justified? seems to defeat the purpose of books like this. The aim was clearly Circe but we fell short.

Don’t even get me started on the weird retcon of Ravana as a misunderstood tech bro who’s not accepted by the reactionary conservative gods.