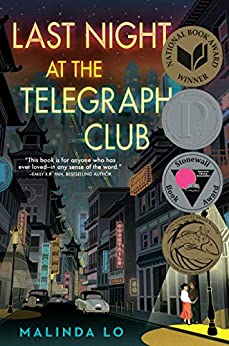 In 1954 San Francisco, high school senior Lily Hu has a lot on her plate. Her busy parents, a doctor and a nurse, rely on her to look after her younger brothers until they get home from work. Her best friend Shirley is still trying to run Lily’s life, wrangling her onto dance committees and trying to set her up on dates with boys. Lily herself is more focused on doing well in her advanced mathematics class so she can get into college and get a job at the Jet Propulsion Lab as a computer, just like her Aunt Judy. It’s no easy feat, especially as just one of two girls in the class. And about that other girl…

Kathleen Miller is good at math, wants to fly planes someday, and is bold enough to talk back to Shirley in ways that Lily would like to but never does. Lily finds herself wondering more and more about her when an accidental revelation leads the two girls to a shared secret. They start sneaking out at night and going to a place called the Telegraph Club, a bar for women who like women and where a male impersonator named Tommy Andrews performs nightly.

Lo excels at depicting the uncertainty and powerful emotions of adolescence. Lily’s worries and self-doubt ring true and her teenage squabbles with her friend Shirley have the weight of accuracy behind them. Less compelling are flashback chapters depicting the courtship of Lily’s parents and her Aunt Judy’s struggles. Kath’s inner life and home remain frustratingly vague as well. The plotting also leaves a little to be desired. The resolution is foreshadowed too bluntly and awkwardly, and several threads that crop along the way are left unresolved. The specter of anti-Communism is invoked ham-handedly to inject more drama into the plot that isn’t really needed. It seems more like a way for the author to re-establish the time period without making extended reference to the world of 1954.

Still, Lily Hu is a wonderful creation that the reader will truly invest in and feel for and Lo is to be celebrated for bringing her to life.