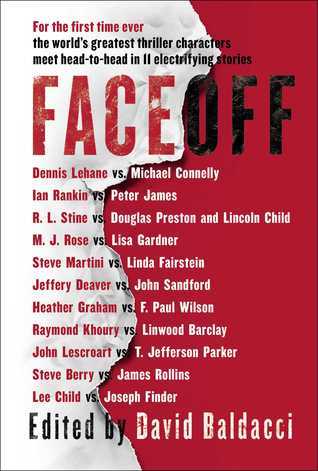 This is the second collaboration audiobook I’ve borrowed and read from my library.  I got into it because of my buddy Michael Connelly.  If you read my previous review that I just posted, you’ll know that maybe he’s not my buddy after all, but Harry Bosch is.  Conveniently, Harry is in this book!

The wording on Goodreads calls this “an unprecedented collaboration”, which sounds very grand.  I didn’t really get it until I looked at all the authors involved and listened to the intro.  Apparently all of these authors have their flagship characters, and their publishing houses basically “own” these characters.  So people can write fan fiction combining characters, but there couldn’t be official books.  This is twenty-three of the world’s best thriller writers who are part of the International Thriller Writers.  They teamed up and wrote stories about their flagship characters facing off / interacting / bumping heads / helping each other out.

I obviously loved the Harry Bosch and Patrick Kenzie (who I’ve never met before) story.  I found that I also liked a great many of the other ones.  I think there was one that I accidentally fast forwarded through, and didn’t go back to fix my error.  I can’t remember which one it was though.  It’s not that it was bad, it just didn’t catch my interest.

The Lincoln Rhyme versus Lucas Davenport one was fun.  I actually found myself wishing it was a real full length story.  The characters were cool, the story was cool, and I was really into it.

I’m guessing anyone who is more familiar with the characters would love this book.  But as I said, I barely knew most of them and I liked it a whole bunch!