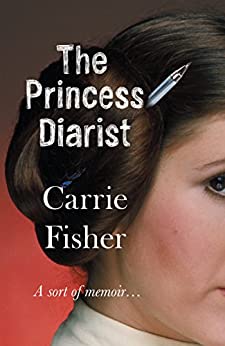 The Princess Diarist is a memoir of how one role came to dominate Carrie Fisher’s career and her life. After briefly sketching her half-hearted entrance into the world of show business, Fisher details the casting process that lead to her becoming the iconic Leia Organa. She also spills the details of an on-set romance before finally going into her uneasiness with all the trappings of fame.

This is the first book of Fisher’s I’ve read. She has a strong reputation on the basis of her other memoirs and her career as a well-paid script doctor, but The Princess Diarist is a tough read. Fisher comes across as someone in love with her own sense of humor, over-extending corny jokes and inserting them where they add nothing to the story. She over-explains and complicates everything, and her invented dialogue is stilted and awkward. She also skips over the parts of the story that I feel sure most people would find interesting. She rushes past the casting and the actual filming of the movie, with the exception of complaining about how stupid her hair looked and how long it took to get it like that.

The big revelation is of her affair with Harrison Ford, who was not only fifteen years older than her, but married to boot. This material is not just uncomfortable for the reader. Fisher seems to be uncertain about revealing it as well. She hems and haws about whether she can justify including this in her memoir, if its too unfair to Ford, and even if she’s just doing to sell more books. Readers will come to their own conclusion about whether this negatively impacts their view of Ford. This section of the book also includes extensive passages from Fisher’s actual diary entries, which are about what you’d expect from a 19-year-old: banal self-reflection and poems chock full of cliched metaphors.

By the time I made it through these diary entries my view of the memoir was dimming, which may well have colored my response to the rest of the book. Fisher spends the last third or so variously complaining about press junkets and the demands of fans at conventions, while also dithering about whether it’s wrong of her to charge so much for an autographed photo. The main takeaway from this part of the memoir is just how much she hated wearing that metal bikini.

Ultimately I can’t really figure out who this book is for. Star Wars obsessives will probably be disappointed in the lack of memories of the film itself, while those eager for juicy gossip will be let down by the fairly tame recounting of the affair with Ford. Even Fisher’s biggest fans will probably be put off by her complaints about fame. There are times in the book where Fisher jokes about writing it for the money. Perhaps it’s not really a joke.