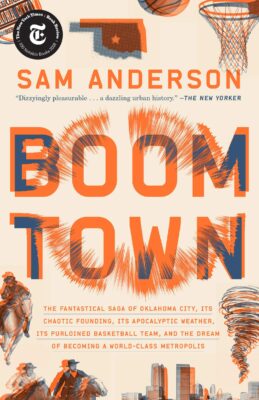 This was another suggestion by Emmalita and I really loved it! I didn’t know much of anything about Oklahoma City beyond the basic facts and this was such a fascinating read. I like history that shows how important every little thing is, and how many interesting stories are everywhere. I also like the attempt to break through the East/West coast’s cultural hegemony and show what’s happening elsewhere and the ripple effects things have.

Boom Town follows the histories of Oklahoma City from its founding, the Thunder NBA team, and also focuses on the weather of the area and the historic (and continuing) racism of the city. It sounds like a lot, but Anderson interweaves them all in a very satisfying manner. You never feel confused or overwhelmed while reading. He’s a clear writer and spent a ton of time interviewing people and doing research, so I felt that I was in good hands as I read. I also liked that he makes his place in the narrative and his opinions clear, instead of trying to present his opinions as the neutral truth.

I did wish he had gone into the current issues facing black people in OKC, as I felt that was a bit overlooked. He did such a great job digging into the history that I wished he’d carried it into the present beyond the one brief section where he talks to one guy. I also wanted him to talk about what impact it might have had on the black Thunder players to be in this environment. It struck me as a blind spot in the book. And I wish he’d also spent more time on the aftermath and impact of the bombing, but I could understand that he had so much to cover that he couldn’t donate more space to it. The chapter on the bombing nearly made me cry, so he did do a great job with it.

Overall, I thoroughly enjoyed this. I would recommended to anyone. It has so many different aspects and angles that I think it would appeal widely. I’m not a basketball person, but the writing was good enough to interest me, which is hard to do, and he also lured me in with city history. So I’m sure a basketball person would end up enjoying the city history as well. The Trojan Horse of narrative nonfiction!

Warnings for: racism, vivid descriptions of the Oklahoma City bombing, children and adults being killed by the bombing, drug and alcohol use, tornados killing people