A subreddit of nerds recently lamented the end of The Expanse – both the nine-book series and the tv show.

Someone in the subreddit helpfully mentioned that if readers like ancient foreboding space tech in the vein of The Expanse’s protomolecule or the Halo’s Forerunners, they might enjoy the Star Trek: Vanguard series of books set in the time of the original Star Trek tv series. 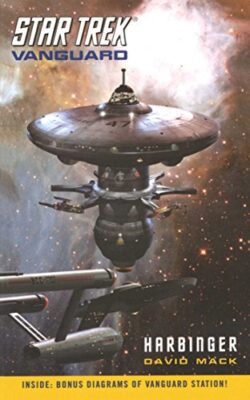 The whole Vanguard series was on sale on Kobo, so I bought them based on that recommendation. At the time the whole series was only $8 total.

Book one in the Vanguard series is Harbinger. It centers around the hastily-assembled space station called…Vanguard. The Federation (the Star Trek people) set it up right in the middle of space between Klingons and a mysterious species called the Tholians. On its face, the location of Vanguard is an effort to avert intergalactic war. However, the situation is more complex than it seems!

Fortunately, the U.S.S. Enterprise shows up to help! Kirk, Spock and the rest of the gang are there to make sense of things. However, Kirk & Co. aren’t the stars of this episode. It’s more of an ensemble cast of both new and familiar characters. My favorite new (to me) character was a schlubby low-level criminal with the fantastic moniker of Quinn Cervantes. (QUINN CERVANTES!) He’s not a Han Solo type. There’s none of that roguish charm. He’s just a cynical failure. Something about his drive to survive is compelling, though.

Other characters fall flat. While this book was published in 2005, the writing and characterization feel more like an action movie from the late 1980s or mid 1990s. While author David Mack makes sure to include diverse species of humans of international backgrounds, they all feel the same.

Maybe that doesn’t matter, though. Escapism may be the appeal of this series. That’s why I chose to read Harbinger in the middle of Omicron and a orientation at a new job. If you’re looking for some bedtime reading that isn’t Literature, consider checking this out from the library. If not, don’t worry. I’ll keep reviewing the series!