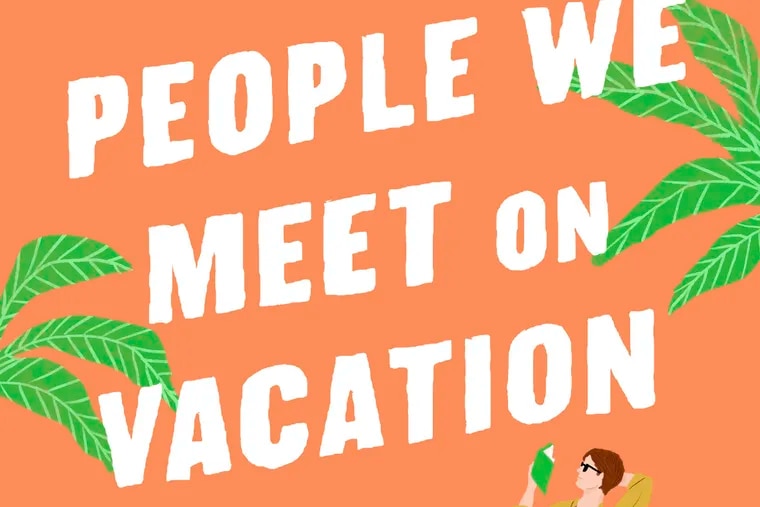 Here’s one I found at a Goodwill for $1.99 (along with a Peanuts Busy Book that had all its figures, minus the only black character, which feels intentional). I’d seen it in Target’s bestseller section plenty of times and couldn’t resist it at so low a price-point. I’m glad I decided to pick it up, because I needed a breezy breather like this after We Were Liars gave me multiple successive gut punches.

People We Meet on Vacation is about friends Poppy and Alex and all of their vacations, up to and including their current one, coming off the heels of a disastrous last one that left them barely talking. We hop around in time, forward and backward, from one vacation to another, getting to know these two, their friendship, and what they mean to one another.

You can pick up rather early on on the fact that Poppy is hopelessly in love with Alex. Literally, I knew this was going to be a “will they or won’t they” story from the moment Alex first appears, and I almost groaned at the thought of hundreds of pages getting to what I assumed was a foregone conclusion for this type of book.

Henry does a great job of keeping it from dragging, though, thanks to that jumping around in time, which keeps plenty of vital information from you, making it so past bits of the story take on a new meaning later on when certain blanks are filled in (like what the actual hell happened in Croatia, a secret Lockhart doesn’t get to until the book is almost over).

She also does a fantastic job of making you like these characters; their banter is nonstop and I loved it. Even if it all plays out pretty predictably, minus some unexpected bumps in the road, I liked their rapport enough to not give much of a damn. Heck, I liked them together so much that I wanted to be sure they stuck together somehow, no matter what transpired between them.

In short, if you want a fast, fun read that’s light on drama (although drama is not completely absent), you could do much worse than People We Meet on Vacation.