I was struggling with my Goodreads reading goal until I came across this short story collection, Black Stars. This Amazon Original contains six afro-futurist novellas from Black authors. I’m only reviewing three since I had limited kindle unlimited borrows. I’m sure some of you can relate to this problem. 🙂 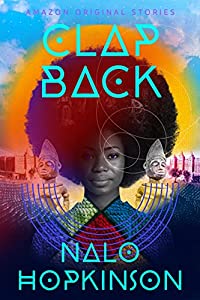 I started with Clap Back (Black Stars #5) by Nalo Hopkinson since I just finished her Sandman Universe book, House of Whispers. We enter the story with news headlines about a new haute couture line that uses nanomachines. A biochemist designed the line to cause the wearer to temporarily share memories. The memories come from the Forgiveness Project where Black people can share their emotions. The goal is to open a discussion about racism and forgiveness. The story properly begins with Wenda, a performance artist setting up her final school project. In direct response to this sensationalist fashion line, Wenda ambitiously tries to use nanorobots on racist figurines from the past. Think Aunt Jemima memorabilia and worse. She calls the project Clap Back. It’s definitely illegal and isn’t even sure if it’ll work. But Wenda is determined to see the course. She chants some magical words to bring the surreal figurines to life. They slowly emerge and begin to wreak havoc in the gallery. They eventually run out into the street as Wenda programmed them to find other racist figurines. Later that night, Wenda goes back to the gallery to survey her collection of animated items, which has expanded with all the newly found items. Wenda is charged with theft and sentenced to 10 years in jail for the stunt.

With more headlines sections, we learn that the fashion line’s memories were a total hoax. And even worse, the nanomachines don’t disappear as advertised. They are replicating and seeped into the water source. So random people absorb them and have the urge to spout random faux quotes. I can see the inspiration from the Elizabeth Holmes scandal. It’s a biting commentary on how her technology was overpromised and not vetted. Hopkinson skips the story further into the future where police brutality finds Wenda’s granddaughter. Her granddaughter is tempted to revive Wenda’s project. She discusses it with a holographic AI based on Wenda’s memories. The ending is open-ended leaving the reader to ponder the morality of using nanorobots for political activism. This was my favorite (so far) of the collection. Hopkinson cleverly brings together hoodoo magic and technology to comment on white supremacy and racism. 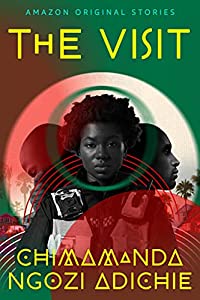 Next, I dove into the first book of the collection, The Visit (Black Stars #1) by Chimamanda Ngozi Adichie. I’ve always been curious to read her but was underwhelmed by this story. I think it didn’t have enough fantastical elements for my taste. In this speculative story about the reunion of two friends in Lagos, gender stereotypes are turned upside down. Obinna and Eze were inseparable growing up, but haven’t spoken since Eze went to America. Eze encouraged Obinna to write poetry. Sadly, Obinna gave it up ever since marrying his successful wife. Obinna became a househusband while his wife moved up the career ladder. They have a fancy house and several kids. As Obinna prepares for Eze, he worries his wife is cheating on him. Shouldn’t he be grateful for the life he has to overlook? When Eze arrives, Obinna has second thoughts. They go out to a club, even though it’s frowned upon for men to go out without their wives. They even get stopped by the police on the way home who crudely ask why they were dressed like sluts. Obinna quickly shares a cover story, but Eze is disgusted as to why they need one. Eze has lived in America with more free-spirit attitudes. He refuses to marry and focuses on his own pursuits. Through the story of Eze’s visit, we learn the dynamics of this futuristic society. Women rule the world while men struggle with equality. This of course echoes the feminist struggles of our present day. It’s an interesting concept showing the extreme if women refused to share power with the other sex. Much of the story centers around Obinna’s anxiety about his wife’s cheating. I left the story disheartened even though it made me examine current gender roles. 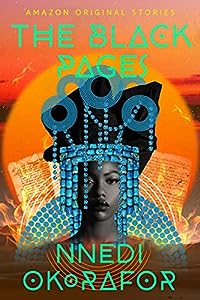 The Black Pages (Black Stars #2) by Nnedi Okorafor was my final read in the collection. This story uses the Djinn myth to comment on the recent burning of books by terrorists in our modern times. We meet Faro as she is freed from her book prison in a burning Timbuktu library. They have killed the library director for mouthing off. Before Faro runs away in her human form clothed in blue beads, she spies a mysterious black book outside the library. She goes to grab it but says she knows they will find each other. The village is in chaos as the French arrive to fight Al Qaeda. That’s when we meet Issaka. He has come home early from America where he’s in grad school. He just wants to catch the bus to reunite with his family. He arrives home to learn his father and uncles have spirited away the ancient library books. This paints a target on their home, which Issaka is shocked to learn. He tries to use his iPad but notices a weird blue bead icon. The same bead we see earlier on Faro. When he clicks it, the djinn spirit reveals herself but Issaka doesn’t want to believe. He used to see magical things when back home in Africa. Turns out that’s because his family is the descendants of those who originally imprisoned Faro. They know of the ancient texts and legends. His mother hints at this but is interrupted when the terrorists arrive. Things descend into violence as one could predict. Issaka escapes to the desert with Faro and the black paged book. He must protect the words and continue his family legacy. As a book lover and Ray Bradbury fan, opening with burning books and a quote from Fahrenheit 451 definitely got my attention! I would love for another novella exploring Faro’s early existence and how she was imprisoned.

I plan to read the other three speculative stories for CBR14. This was an interesting project that I was surprised to see Amazon produce. I try not to buy as many books from them, but I do love them supporting Black authors and speculative fiction. It’s free with Kindle unlimited and comes with Audible narration by some great Black narrators too. If you’re a fan of any of the contributing authors, Octavia Butler, or NK Jemisin, you should check out this collection.

If you’re so inclined, you can find all my book reviews on my blog, Confessions of a Pop Culture Addict.