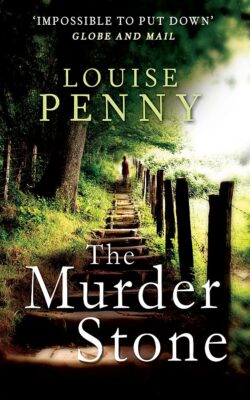 Armand Gamache, the dapper detective from la belle province’s Surety de Quebec, is back in this fourth installment in Louise Penny’s series. This time Gamache is not in Three Pines, the idyllic but murder-y town in Quebec’s eastern townships, but Manoir Bellechasse, a lakeside hotel resort the next valley over. It is the height of summer and Armand and his wife, Reine-Marie, are celebrating their anniversary the same way they do every year, at the Manoir. The resort’s other guests are the Finneys, a snooty extended family from Westmount, the ritzy anglais-speaking Montreal neighbourhood. The Finneys are having an family reunion at the hotel in order to erect a statue to their father, which is being installed in the garden.

It’s the hottest day of the year and tensions are high not only among the guests- family tensions are running high- but also the staff, where some of the younger seasonal staff are chafing with the more experienced hands. The pressure mounts metaphorically and meteorologically, with a murder coinciding with a summer thunder storm. Gamache gets to work investigating the motives of the many potential suspects. It’s a task made more difficult by the last arriving Finney sibling being Gamache’s friend and acquaintance from Three Pines- turns out Finney is the stepfather, so the siblings have a different name (I won’t spoil the surprise).

As far as the actual mystery goes, this one felt a little weak- the motive didn’t seem strong enough to feel realistic. That said, that isn’t always the main point of this series for me- they are more like character/setting studies with a mystery thrown in. From that perspective, I really enjoyed the change of scenery from Three Pines to the Manoir, which is an actual hotel that I would love to stay in (https://www.manoirhovey.com/en). The character development with the Three Pines sibling was also nice- no one is perfect, not even the inhabitants of a an idyllic village. We also get more background info on Gamache and his family- these feel like slowly peeling onion layers. A nice little instalment in the series- not one I’d recommend as a first stand alone book, but it fits well into the overall whole.